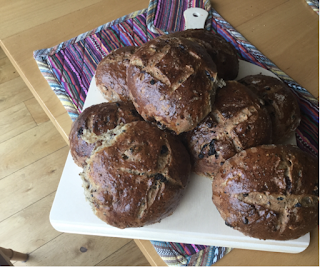 Yesterday, I checked the cheese box in the fridge. For some reason we've bought rather a lot of mature cheddar.

Clearly, it's time for Loaded Fruit Bread. There's nothing nicer than fresh fruit loaf, rich dairy butter and a chunk of mature cheddar.

This is my recipe for fruit bread. It can be fruit loaf, fruit baps or even hot cross buns. The recipe works nicely for all three.

The mix gives you a 79% hydration level which is quite sticky and needs longer to develop the gluten. However, it produces an airy crumb that is light, considering the quantity and nature of the ingredients. If you want a lower hydration level, don't let it drop below 68%.

500 gms of strong white flour (or wholemeal mix on a ration of 70:30 white to wholemeal)

To the cooled tea, add the sugar, salt, milk, butter. Then cover with the flour and add the yeast. Keep the yeast away from the salt until it's all been mixed together.

Add the optional seeds at this stage.

If you're mixing by hand, bring it all together into a dough adding the fruit as you go.

If you're mixing by machine, add the mixed fruit after 50 minutes of a 2hr 20 minute basic dough cycle. If you have a basic raisin setting, it will beep after 50 minutes to remind you to add the fruit.

At the end of the mixing time, your dough should look like this: 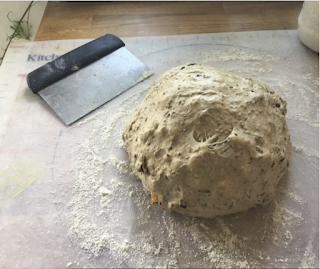 With all the ingrdeients in, including the optional seeds, this produces a mix that weighs 1342 gms. My baking tray has room for eight fruits baps, each weighing in at approximately 167 - 168 gms. 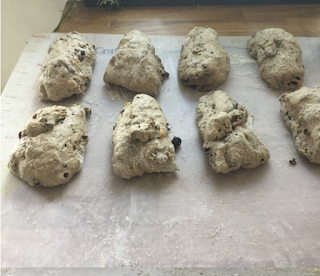 Once cut into portions and weighed, they need rolling into baps. There are many YouTube videos that will demonstrate how to do this. I've developed my own technique over the years:

(i) flatten the dough and bring all the edges in to the middle;

(ii) turn the dough over and, with cupped hands underneath, encourage it into a ball;

(ii) flatten the top with the palm and repeat the cupping, turning the dough, tapping it flat and cupping again.

Eventually you end up with a satisfactory shape. 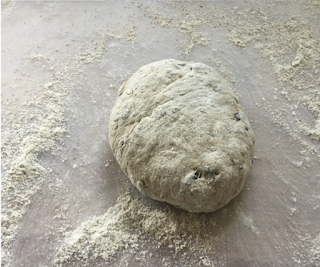 Place the baps on a floured tray. I use a silicone liner which means I don't have to use extra flour as nothing sticks. You can use parchment paper, but I find silicone is foolproof. 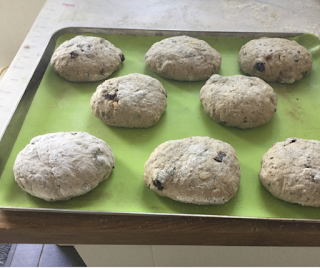 Place in a warm environment (approximately 23 - 26 degrees C) for about 45 minutes or until they have more or less doubled in size.

Preheat the oven to 200 degrees C. When the baps are ready, gently glaze them with an beaten egg yolk mixture and put them in the oven on a low shelf for 30 minutes or until they are done and sound hollow when tapped on the underneath. 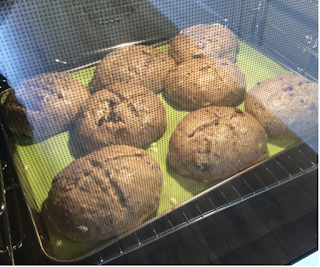 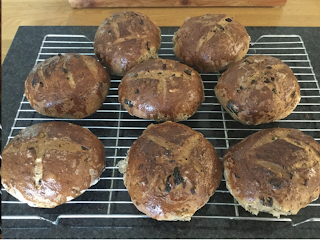 It is said that the Alban Bun, the precursor to the hot cross bun, originates in St Albans where Brother Thomas Rocliffe, a 14th century monk at St Albans Abbey, developed an original recipe.
From 1361, Brother Thomas would distribute these buns to feed the poor on Good Friday.
The original recipe remains a closely guarded secret, but ingredients include flour, eggs, fresh yeast, currants and grains of paradise or cardamom.
Nowadays, in St. Albans, the Alban Bun has a simple cross cut across the top rather than the piped addition we're used to seeing in the supermarkets.
Happy baking....
Labels: baps fruit fruit bread hotcross buns loaf rolls