It's hard to imagine a time when we didn't know what a sultana was. They were imported to English-speaking countries in the 17th century from the Ottoman Empire and today, we import mainly from Australia and Turkey.

Sultanas are dried pale green grapes, whereas raisins are from the darker-skinned grapes and currants from the smaller Black Corinth seedless grape. Closely related, they are so very different in their dried form.

In America, both raisins and sultanas are 'raisins'. To distinguish between the two, sultanas are 'golden raisins'. Typically, sultanas are coated in an oil-like substance to aid the drying out. If you want unadulterated sultanas, buy Australian ones. They're usually darker and often referred to as 'natural sultanas'.

Golden sultanas - which are available from specialist health food shops are also an interesting health food choice. Steeped in gin for 14 days and taken in 10s every day, they are said to have an extremely efficacious effect on people suffering with arthritis.

Whichever you choose, you're safe in the knowledge that they are a very healthy food source; high in fibre, good for reducing blood pressure and a great source of antioxidants.

And there's nothing nicer than a slice of toasted fruit bread for breakfast, slathered with golden butter.

But, let's get on with it. BreadClub20's Sultana Loaf

Instead of the mixed spice, you could use a teaspoon each of ground ginger, cinnamon and mixed spice (total 3 teaspoons). Don't be tempted to substitute raisins or candied peel for the sultanas - this is, after all, sultana bread and not simply fruit bread.

If you're mixing by hand, remember to mix the dry ingredients including the salt and then slowly mix in the wet, including the yeast. Then thoroughly incorporate the sultanas. Place on a floured board and knead until you have a stiff dough. Place in a lightly oiled bowl, cover and put somewhere warm for one hour or until doubled in size.

If you 'need' a hand learning how to 'knead'.... watch https://www.youtube.com/watch?v=5ZqJyalYqKU

If you're using a machine, add the wet ingredients to the pan aand then add the dry (excluding the sultanas) and finally the yeast. Choose a basic dough programme (2 hours and 20 minutes) and add the sultanas after 53 minutes, If you have a basic raisin setting - it'll prompt you when it's time to add the sultanas.

When the dough is ready, shape it and prepare it for the final prove.

The dough will be enough for:

8 hand rolled baps (formed on a floured board) If you want a hand rolling baps see Stage 2 at https://breadclub20.blogspot.com/2020/11/multigrain-rolls-ideal-for-sandwiches.html  There's an embedded video that might be useful)

or placed to prove in wicker bannetons.

Place the dough somewhere warm (about 22 - 24 degrees C) for about an hour until it's doubled in size.
At the end of the hour, heat the oven to 190 degrees C and place a rack low down in the oven.
If your loaves are in tins, they can be placed directly onto the oven rack or onto a baking sheet or a tray first and then placed into a heated oven for 30 minutes.
If you're working with bannetons....carefully tip the dough out of the bannetons and onto parchment paper. Slash the top of the dough to allow for expansion and then, using a peel or pizza slice, slide onto a preheated pizza stone, cordierite sheet or a well-floured baking tray.
Bake for 30 minutes.
Remove from the oven and make sure they sound hollow when tapped on the bottom. 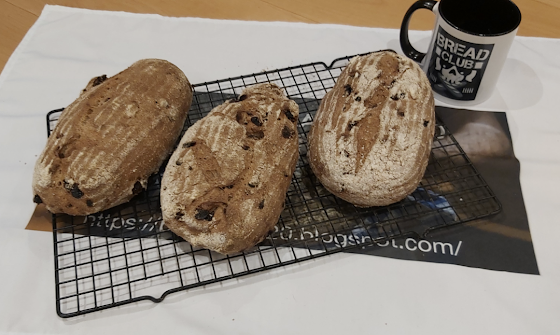 Cool on a wire rack. Freeze if necessary.
Happy baking....