Breakfast Brioche Baked in a Bundt 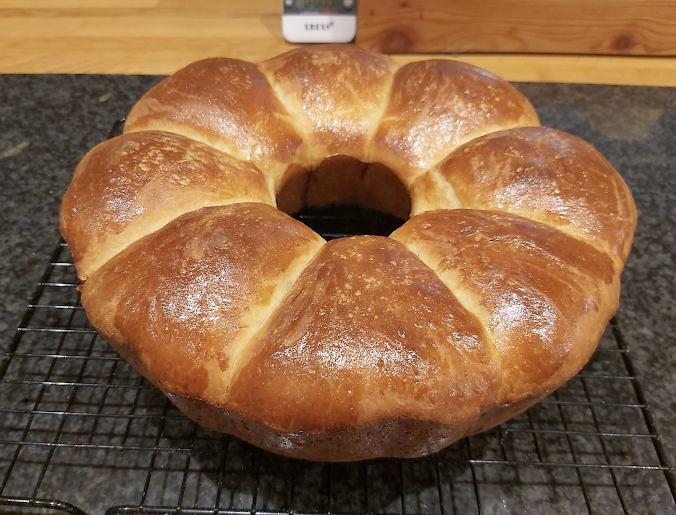 How alliterative can you be? A Breakfast Brioche Baked in a Bundt? That alliterative, apparently.
A Bundt derives its name from the combining of Bund and Kuchen (cake). While kuchen is fairly easy to trace, bundt  is a little more complicated. Some say, its name comes from the fluting on the side of the pan - to represent a sheaf. Others say, it's from the word for 'bundle', as we bundle or bunch the dough together around the inside of the pan.
From its early days, when it was used to make Gugelhupf, with cocoa, vanilla, lemon or even marbled,  the popularity of the pan has spread worldwide, with over 60 million pans being sold across North America alone.
Why use a bundt? Because it offers even heat transfer and is ideal for a sweet, enriched bread, such as the Brioche.
The Brioche, however, has a long, long, history. The word is first recorded as early as 1404. By 1611, Randle Cotgrave in his Dictionarie of  the French and English Tongues, suggested the word came from bris (rto break) and hocher (to stir). However, I prefer the alternative etymological suggestion that it derived from where it was first made and from where it developed its popularity - Brie....16 miles west of Saint-Quentin in Northern France.
It's alway been rich, and sweet, being more of a Viennoiserie than a traditional bread. It was made for the wealthy - as we found out from Rousseau, when he relates what a 'great princess' is supposed to have said when she recommended the peasants ate it...as they'd run out of bread...
My recipes for Brioche Nanterre (https://breadclub20.blogspot.com/2021/01/apricot-brioche.html) and plaited Apricot Brioche (https://breadclub20.blogspot.com/2021/01/apricot-brioche-using-plait-technique.html) and two-day bakes.
To try and speed things up a little, this is a same-day bake, reducing the time for the dough to cold proof.
INGREDIENTS (please note carefully)
60 mls warm milk (preferably full fat)
300 gms plain flour (also known as all-purpose flour - NOT bread flour)
50 gms caster or very fine sugar
1 teaspoon sea salt (crushed)
150 gms unsalted butter (warm but not melted)
125 gms lightly whisked eggs (it's about 2½ eggs - save the rest for glazing)
1½ teaspoon instant active yeast 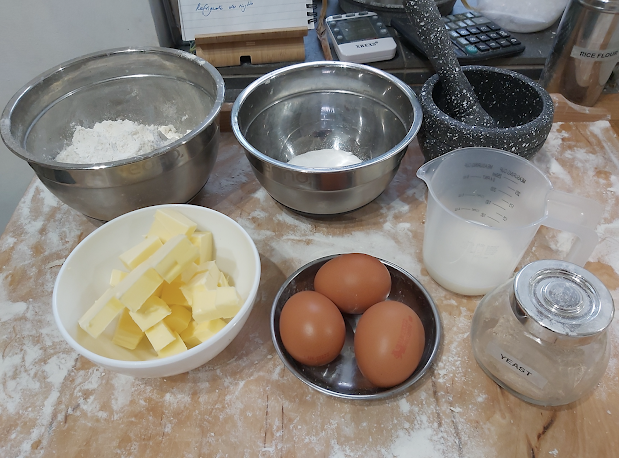 METHOD
1. Start by adding the yeast to a little of the milk and a little of the sugar. Leave for 10 minutes until foaming. The purpose of this is to activate the yeast, but it will also help you to ensure that your yeast is active.
2. To a large bowl, a stand mixer bowl or to a bread machine bowl, add the salt. Then add the flour, the salt, the milk, the eggs and the foaming yeast.
3. Mix together until well incorporated and then add the butter, a little at a time.
NOTE: It takes a long time to form a dough by machine. By hand, it will take even longer. If you have a stand mixer, start on low and then then on medium and be prepared to mix for up to 20 minutes until the dough comes together. If you're using a bread machine, find a programme (e.g. pizza) that starts immediately and keeps running. Again, be prepared to keep the machine mixing for 20 minutes.
If after 20 minutes, the dough is still too slack, try adding a little strong bread flour, a tablespoon at a time, until the dough comes together. You may need 2 - 3 tablespoons in total.
4. Ease the dough into an oiled bowl, cover and place somewhere warm (24⁰C - 26⁰C) for two hours
5. After two hours, knock back the dough and and tip onto a lightly-floured work surface. 6. Fold the inside of the dough in on itself half a dozen times and then form into a log. Divide into eight equal portions. Make each portion into a ball and place on a tray lined with parchment paper.
7.  Spray them lightly with oil and cover the tray with cling film. Place in the refrigerator for 90 minutes. 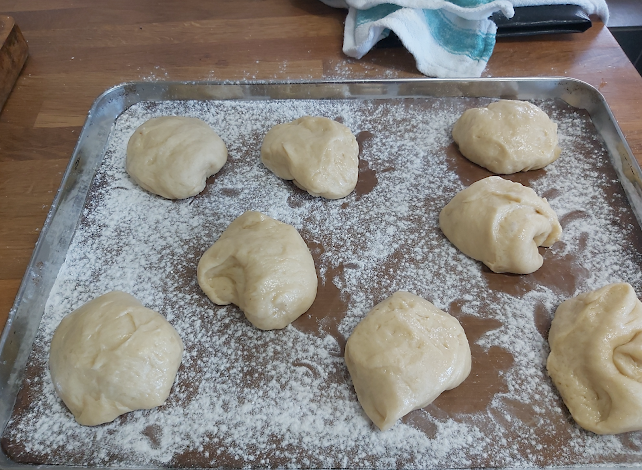 8.  Generously grease a 24cm bundt pan and set to one side.
9. Remove the dough from the fridge and tip out onto a lightly-floured work surface.
10. Roll each portion into a ball and place in the greased bundt pan, equally spacing them apart. 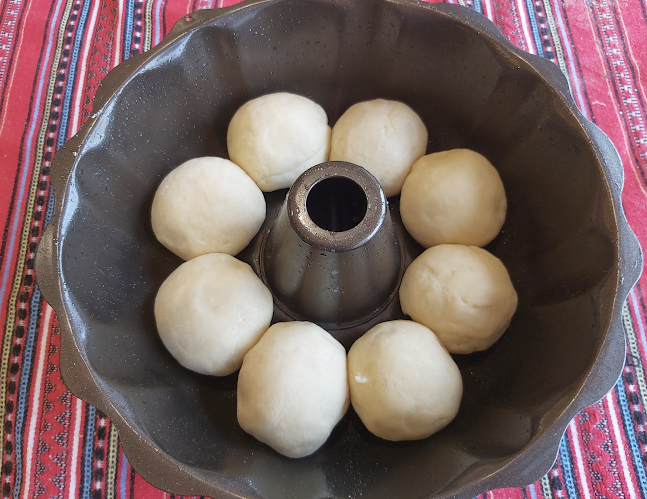 11. Cover and leave in a warm place for three hours or until the dough has doubled in size. 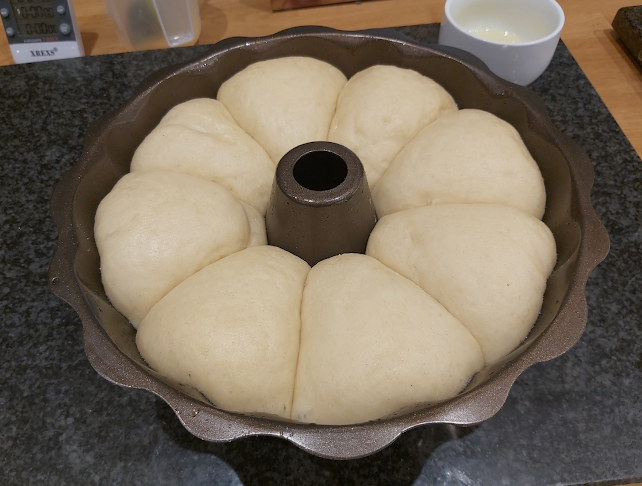 12. Preheat the oven to 200⁰C - low shelf.
13. Brush the brioche with egg wash.
14. Bake uncovered for 15 minutes. Then, lightly cover with aluminium foil and continue to bake for a further 20 minutes.
The internal temperature of the brioche should reach 88⁰C.
16. Remove from the oven, remove from the bundt mould and allow to cool on a rack for at least an hour. 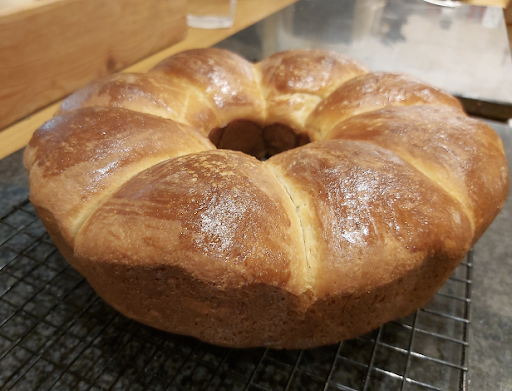 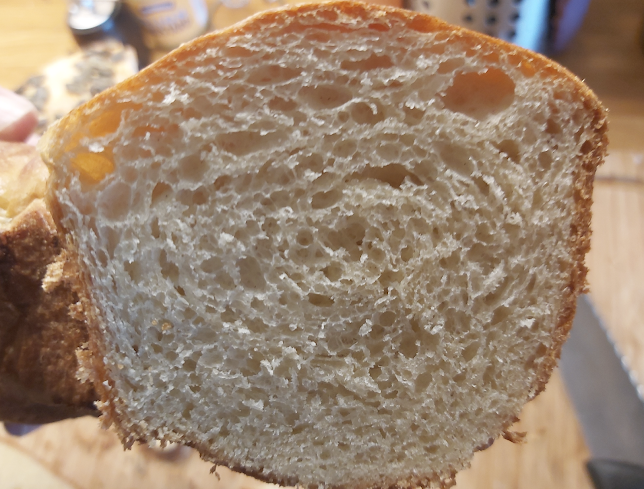