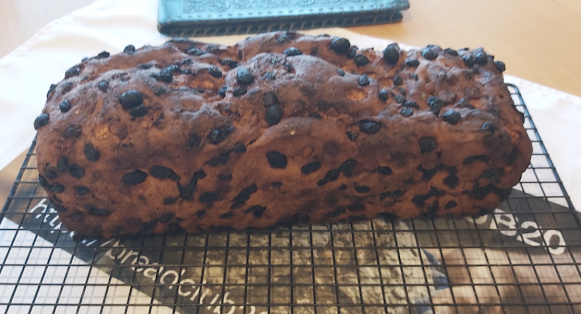 In 1932, Florence White published ' Good Things in England", a collection of 853 regional recipes, the earliest of which dates from the 14th century. Florence White was the first freelance food journalist in England. She established the English Folk Cookery Association in 1928. Her 1932 book, published by Jonathan Cape, is still in print, although the cover has had a facelift. Original copies are still available but fetch a pretty penny on Ebay.

Her recipes are fascinating. She even has a recipe for frumenty, a dish I first came across when, for 'A' level,  I read The Mayor of Casterbridge, by Thomas Hardy. Acknowledged as one of England's oldest dishes, frumenty is a porridge served with milk, raisins currants and a good slug of under-the-counter rum. It was the downfall of Michael Henchard on that fateful day in 19th century Casterbridge when drunk, as a result of too much furmenty, Henchard sells off his wife, Susan and his daughter, Elizabeth, to Richard Newson - a passing sailor - for the sum of five guineas.

But, back to Lancashire Bun Loaf. After blogging my 'Loaded Fruit Bread' (https://breadclub20.blogspot.com/2020/10/loaded-fruit-bread.html), I had a number of conversations with people about the difference between a Hot Cross bun and other forms of fruit bread. As a child, I remember my mother buying 'Bun Loaf', a rather insipid white bread with a few sultanas or raisins dotted within. However, it made excellent breakfast toast and was lovely with a slice of strong cheese as a treat mid-afternoon.

And that got me thinking from where the more traditional Lancashire Bun Loaf might have originated.

This particular recipe appears in two interesting collections. The 1932 collection of Florence White and a later publication of 1954 by Dorothy Hartley.

Hartley's mother's family were from Froncysylltau, in North Wales - just a few miles from where I'm writing this. They were mine and property owners. Dorothy was brought up in Skipton and educated in Loughborough and Nottingham.  In 1933, she bought Fron House in Froncysylltau near Llangollen and lived in North Wales until her death in 1985 at the age of 92.

During a varied career, travelling as a photographer to Egypt and the Congo, lecturing at Goldsmiths, working with the first TV celebrity chef, Philip Harben and acting as adviser to The Archers, she found time in 1954 to write her collection Food of England . Interestingly, the collection contains English, Scottish, Cornish and Welsh recipes all bundled together under the misnomer of being 'Food in England'. 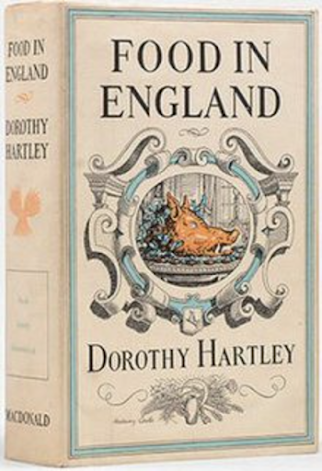 Where this actual recipe originated, I know not. Whereas you can pin the origins of the milk roll down to Blackpool, Stotty cakes to the North-East and Wet Nelly to Speke in Liverpool, the Lancashire Bun Loaf seems to have been adopted throughout the Shire.

Lancashire Bun Loaf is an old recipe. It produces a dense and very buttery bread that is difficult to toast. It's a straightforward recipe, albeit in two parts. If you want a fruit loaf that tastes like a hot cross bun, then try my Loaded Fruit Loaf recipe,

If you want a basic fruit loaf that toasts beautifully, try the Sultana Bread,

But for the afficianadoes or the purists.....here's Lancashire Bun Loaf.

Part One - you need to produce a quantity of bread dough

Part Two - you then add additional ingredients to the dough before a final prove and a bake.

This is quite a large bake. If it's your first time, you may wish to halve the quantities to produce one decent-sized loaf and then, next time, double up to the quantities below.

If you're mixing by hand, remember to add the dry ingredients to the wet, keeping the salt away from the yeast until the last moment. Mix and then knead on a floured board until you have a silky dough. Place in a lightly oiled bowl, cover with a tea towel and leave in a warm place until it's doubled in size.

If you're using a machine - choose a basic dough setting (2 hrs and 20 minutes). Remember to add the wet ingredients first, including the salt, and the dry ingredients after - leaving the yeast until last.

When the dough is ready and it has had its first prove, turn it out into a bowl and you're ready for Part Two.

(Hartley also includes 6 ozs currants, as I've done here.  It's a lot of fruit to incorporate into the dough...personally, having done it both ways, I'd probably leave the currants out, even though it's not in the spirit of authenticity)

half teaspoon of sea salt

Florence White mentions the use of salt and sugar. I'm adding a little, but not as much as I would usually use. 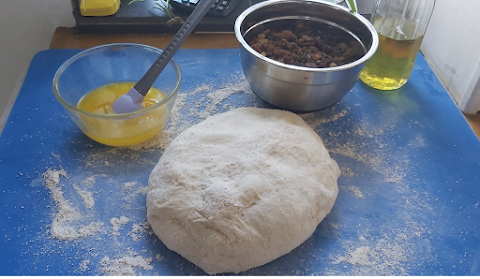 Work the melted butter into the dough and then mix in the fruit, spice and peel very thoroughly. Knead until all the ingredients are incorporated. It becomes rather sloppy - almost of a cake mix consistency. Mind you, there's a fair bit of butter in this. 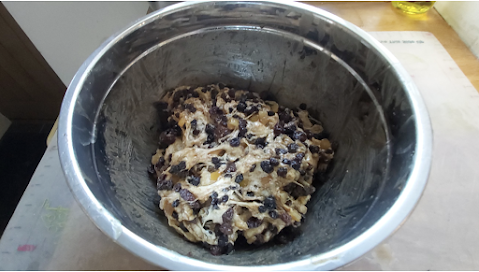 I have a large Pullman tin that I've oiled and put the lid to one side.

Place into the buttered tin and leave in a warm place to prove for the second time for 60 - 75 minutes. 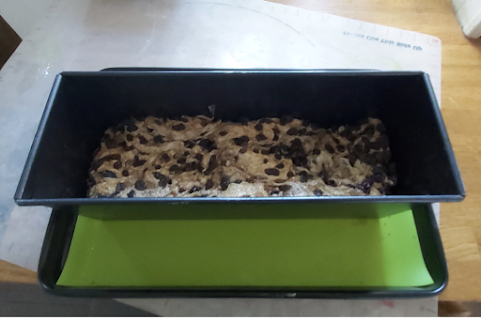 At the end of the second prove, your dough should look like this:

Preheat the oven to 180 - 190 degrees C and bake for about one hour until golden brown and hollow-sounding when tapped. 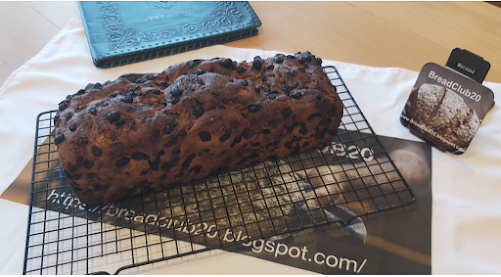 Lancashire Bun Loaf...
Happy baking...
POSTSCRIPT
Fruit distribution could have been better. I think I'd knead the fruit in first next time and then add the butter, rather than the other way around.
Mind you, if it was all in the taste...it's a winner.