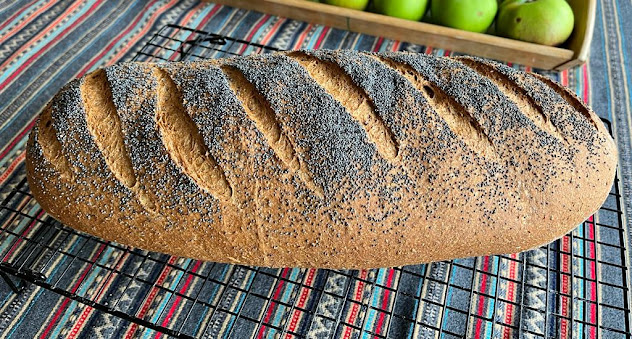 This is a recipe for wholemeal bread. I'm making it as a boule and an oval but it can just as easily be formed using a loaf tin or even as rolls. It's entirely up to you.

I'm also making a DOUBLE mix - but the ingredients here are for a SINGLE mix.

Wholemeal bread is often called wholewheat bread. It's made from from flour where the majority or all of the wholewheat grains are milled.

It's nutritionally richer than white flour, where the bran and the germ layers have been removed leaving about 75% of the original grain. Outside of the EU, white flour is often bleached using a range of undesirable chemicals or gases. Brown flour contains about 85% of the original grain and  remains chemically unbleached. White and brown flours are lighter to work with but also lower in nutrients. Consequently, as a result, wholemeal flour is heavier and a little more difficult to handle.

Traditionally, the whiter the bread, the more expensive it was to buy and the richer you were to be able to buy it. White bread was the staple of kings and emperors, lords and ladies and, eventually, the middle classes.

In medieval Europe, wholemeal bread was known as 'horsebread'. It was a dark, low quality bread made with whole grain, but also included acorns, split peas, bran, oats and maize.

During the Irish Famine and prior to 1848, the poor were given 'brown bread' containing high quantities of bran and it was considered only fit for the desperately poor. However, by 1865, attitudes to wholewheat bread had changed dramatically when it was realised that, nutritionally, it was better for you than the white alternative.

In the United States, the reformer, Sylvester Graham (inventor of the Graham cracker), promoted 'Graham Bread' in the 19th century. It was rich in whole grain and supported his belief in the benefits of a vegetarian and temperant lifestyle.

First of all we're going to autolyse.

Place the flour in a pan (if you're using a machine) or bowl (if you're mixing by hand) and add the water.

Combine the water and the flour together and then cover and leave for 30 minutes.

Place the water and flour mixture in a bowl and add the softened butter, the salt and the sugar. Mix together. Add the yeast and continue to mix until you have a sticky dough.

Turn out the dough onto a floured board and knead until you have a soft and silky dough.

Here's a useful video on the art of kneading bread. https://youtu.be/ySOj0fFWo1U

When you have a smooth and silky dough, place it in an oiled bowl and put somewhere warm (22 - 24 degrees C) for one hour.

At the end of the hour, tip the dough out onto a floured board and knock it back, so removing all the air.

This formula lends itself to a bloomer, a boule, a tin loaf, baguettes, rolls, a tear and share.....it's all in the shaping.

Then it's going to rest for a further hour.

Preheat your oven to 200 degrees C

If you're using a pizza stone or corderite, remember to put it into a cold oven and heat it from cold.

Lightly spray the loaf with water.

Turn the loaf out onto a baking sheet or on to a baker's peel, slash as desired and then place on a low shelf in the oven.

Bake for 30 minutes until it sounds hollow when tapped on the bottom.

Cool on a cooling rack.

This formula lends itself to a bloomer, a boule, a tin loaf, baguettes, rolls, a tear and share.....it's all in the shaping. 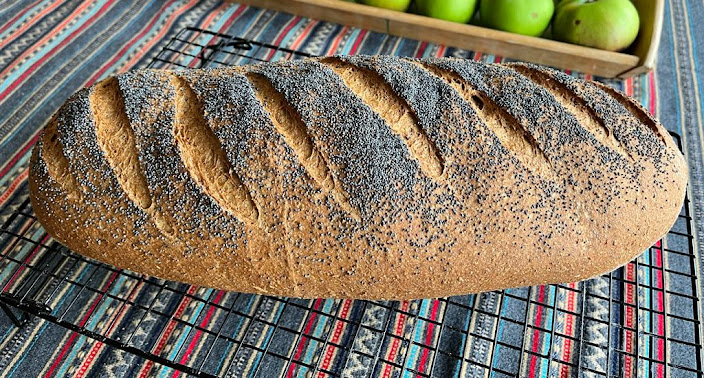