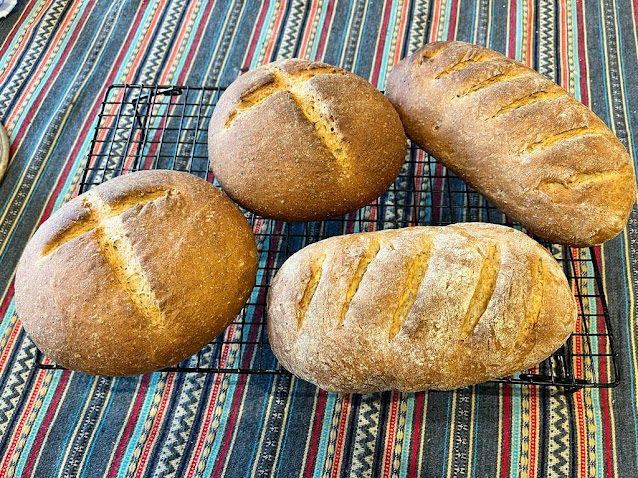 As a peasant in Medieval or Tudor Britain, bread made from the finest wheat flour certainly wasn't for the likes of me. Not while I was scraping a living out of the land and beholden to almost everyone else who walked God's Earth. 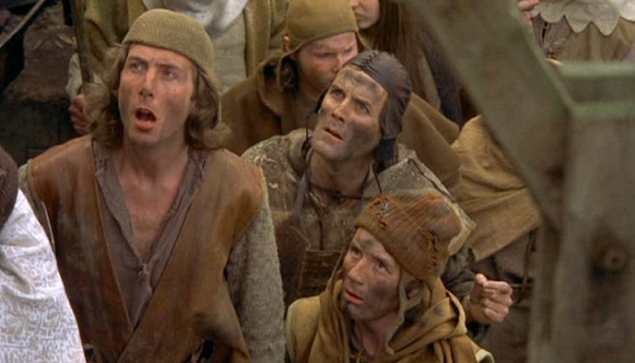 I would have eaten Maslin bread. It would have been made from a mixture of poorer quality wheat, with added barley, pea and rye flours. Whilst that might sound tasty to a modern-day palate, it produced a grey, barely appetising, rough flour, usually including a fair amount of millstone grit. This mixed flour made my bread and also the edible trenches for the slightly more fortunate.  Did wonders for the teeth and digestion.

Meanwhile, over at the big house, the wealthy enjoyed a different fare.

For then, the order of the day was Manchet or Pendemain (also known as panis dominis - the lord's bread). This was an entirely different bread.

Manchet was made with the finest wheat flour available. It was double-boulted, that is to say, put twice through a cloth sieve to remove the bran. Although it was still quite a dark flour, as modern-day roller milling had yet to be invented, it was cleaner and certainly finer than that offered to the lower classes and distinctly poorer.

'White' Manchest flour produced a lighter loaf, at a price. The extra labour needed to produce a finer flour, combined with the purity of the grain being milled, meant that Manchet bread could only be within reach of the wealthy. It might not have been as white as we know it now, but it was distinctly less grey than that used for Maslin bread and certainly a status symbol adorning your table.

It was so indulgent that in 1417, Henry V forbade its consumption during Lent. 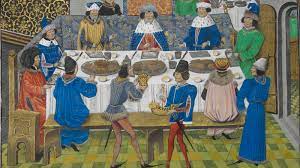 In the absence of Medieval grain, Tudor mills and a draughty 14th-century baronial hall, I've brought the essence of Manchet bread up to date...dragged it screaming and kicking into the 21st century and made something that, hopefully, wouldn't have been a million miles away from the original, whilst managing to avoid expensive dental bills as a result of millstone grit chipping away at the cusps of a back molar.

450 gms tepid water (preferably filtered - or at least free from cholera, frogspawn and / or botulism)

If you don't have access to fresh yeast, you can use 15gms of dried yeast + 1 teaspoon of dark sugar OR 1 heaped teaspoon of instant yeast.

Firstly, activate your yeast (fresh yeast or dried yeast) by mixing together in a bowl and placing it somewhere warm for about 10 minutes until it starts to froth. Use as soon as possible afterwards.

If you are using instant yeast, add it to the flour as directed and then proceed.

1. Mix the flour together and then fully incorporate the salt into the flour mix.

2. Add the yeast mixture and mix thoroughly. Then add the remaining water and bring it all together.

3. Knead it until you have a smooth dough. You may need to add a little more flour if the mixture is too wet. 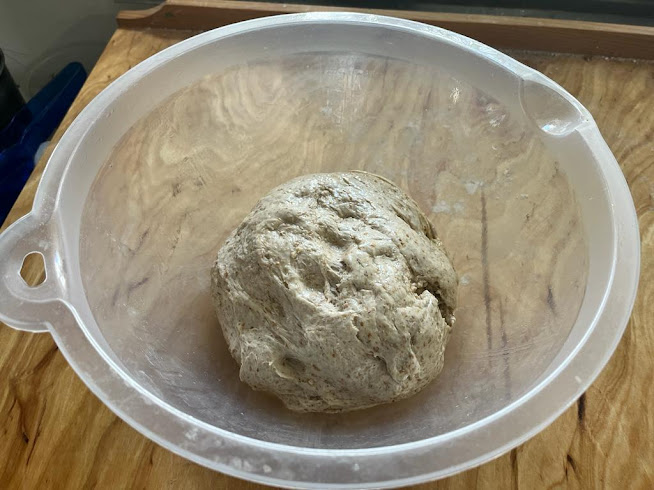 4. Once you have a silky, smooth and elastic dough, place it in a lightly-oiled bowl, cover with a cloth and leave it until it has almost doubled in size. This may take longer if your kitchen is cool. Expect it to take somewhere between 1½ and 3 hours.

WATCH THE DOUGH, NOT THE CLOCK

5. Knock it back in the bowl and give it a final kneading for two or three minutes.

At this stage, you can divide the dough as you wish. This is a 700 gms flour mix. It will make a very large boule, but may be better divided into pieces and shaped as boules or batards. 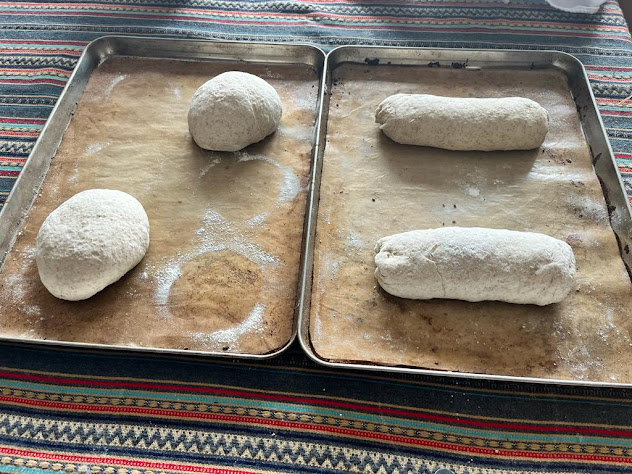 6. Shape into a tight loaf (according to your choosing) and place on a prepared baking sheet. Cover and allow it to proof for a second time, at room temperature. This should take somewhere between 30 and 45 minutes. It's ready when you can gently prod the dough with a fingertip and it returns slowly to its original position. 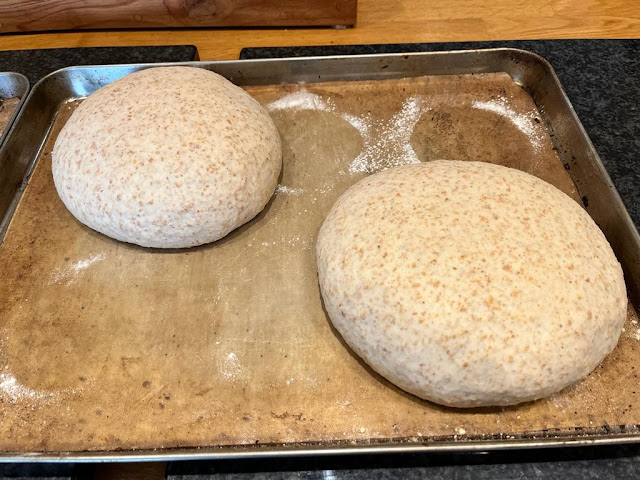 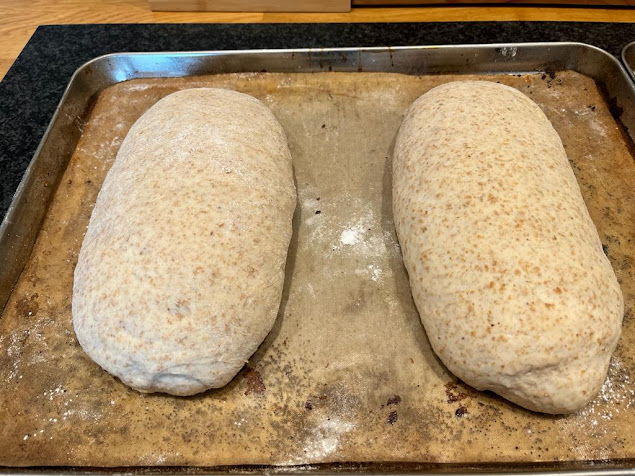 Manchet loaves should not be large. After all,  they were designed to be served at the table and eaten with meals. There wasn't supposed to be much left for a mid-evening swan sandwich while you're watching the Court Fool.

8. Bake at 230⁰C for 10 minutes and then reduce the heat to 200⁰C and continue to bake until the loaf is golden brown and sounds hollow when tapped on the underneath. 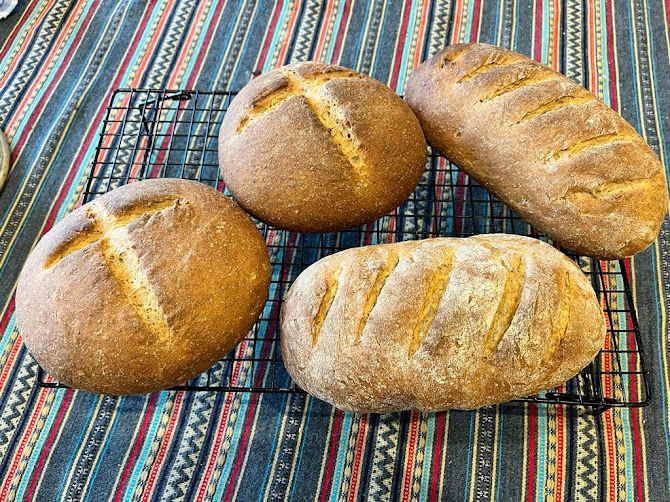 There are no preservatives in this bread. Eat it within 24 hours.

Small beer (ale) would often be used as a replacement for the water.

Fresh beer yeast would be used instead of bread yeast.

A 14th-century recipe for Fine Manchet - the very best thing BEFORE sliced bread!

“Take two peckes of fine flower, which must be twice boulted, if you will have your manchet verie faire: Then lay it in a place where ye doe use to lay your dowe for your bread, and make a litle hole in it, and put in that water as much leaven as a crab, or a pretie big apple, and as much white salt as well into an Egshell, and all to breake your leven in the water, and put into your flower halfe a pinte of good Ale yest, and so stir this liquor among a litle of your flower, so that ye must make it but thin at the first meeting, and then cover it with flower, and if it be in the winter, ye must keepe it verie warm, and in summer it shall not need so much heate, for in the Winter it will not rise without warmeth.
Thus let it lie two howers and a halfe: then at the second opening take more liquor as ye thinke will serve to wet al the flower. Then put in a pinte and a halfe of good yest, and so all to breake it in short peeces, after yee have well laboured it, and wrought it five or sixe tymes, so that yee bee sure it is throughlie mingled together, so continue labouring it, till it come to a smoothe paste, and be well ware at the second opening that yee put not in too much liquor sodenlie, for then it wil run, and if ye take a litle it will be stiffe, and after the second working it must lie a good quarter of an hower, and keep it warme: then take it up to the moulding board, and with as much speede as is possible to be made, mould it up, and set it into the Oven, of one pecke of flower ye may make ten caste of Manchets faire and good.“ 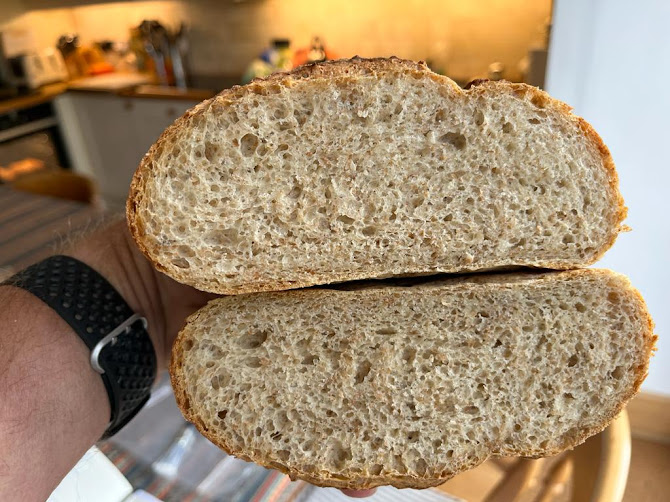