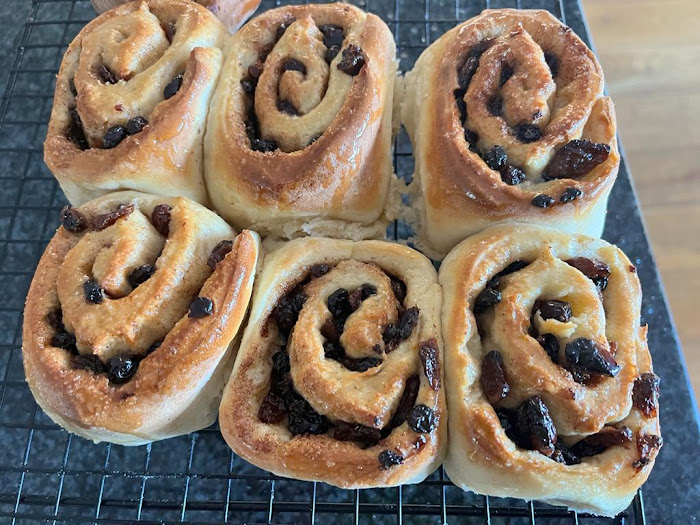 On the main road from Pimlico to Chelsea, just by Ranelagh House and Gardens is Jew's Row. It's by Grosvenor Row and not far from the Chelsea Hospital.

Back in the early 18th century, The Chelsea Bun House was situated in Jew's Row. Frequented by Royalty - Georges II and III, as well as Princess Caroline, Lord Ranelagh and Jonathan Swift, it was famous for its Easter Hot Cross Buns as well as the distinctive bun that took its name into history - the Chelsea Bun.

The business survived until 1839, when the Chelsea Bun House was finally demolished. Founded by the Louden family,  David Louden eventually sold out to Richard Hand, known as 'Captain Bun'. Richard's wife continued to run the Bun House after his death. From son to son, the business continued until it closed in 1839 when the property reverted to the Crown and all the equipment was auctioned off.

The Chelsea Bun recipe and product we are familiar with today is remarkably similar to that produced when the Bun House was at the height of its business. Except perhaps today, we'd expect our Chelsea Buns to be fresh and not stale - a criticism expressed by Jonathan Swift, when he wrote in A Journey to Stella (Tuesday 28th April 1711):
"A fine day, but begins to grow a little warm and that makes your little fat Presto sweat in the forehead. Pray, are not the fine buns sold here in our town; was it not Rrrrrrrrrare Chelsea Buns? I bought one today in my walk. It cost me a penny; it was stale, and I did not like it"
INGREDIENTS
The ingredients are in THREE parts: (i) the dough, (ii) the filling and (iii) the glaze
The Dough
450 gms of T55 or strong white bread flour. (I'm using T55 flour to introduce a little lightness to the dough, strong white bread flour would be fine)
10 gms fast-action yeast
50 gms golden caster sugar
150 mls tepid milk
1 beaten egg
1 teaspoon sea salt
50 gms unsalted butter
The Filling
25 gms softened butter
100 gms currants
50 gms of roughly chopped sultanas
2 teaspoon mixed spice
25 gms caster sugar
The Glaze
2 tablespoons of caster sugar (golden or white) dissolved in 1 tablespoon of warm water
STEP 1
(Handmixing)
Mix the flour, yeast, sugar and salt together in a large bowl. Add the warm milk, egg and butter. Mix well until you have a soft dough.
Tip the mixture onto a floured board and keep kneading until it feels smooth and elastic. (There's a video of kneading techniques in the Useful Links section on the left of this page)
Shape into a ball and place in a lightly-oiled bowl. Cover with cling film and place somewhere warm (22 - 24 degrees C) for about an hour or until it has doubled in size.
Move on to Step 2.
STEP 1
(Machine Mixing)
Place all the ingredients in the pan - starting with the wet, moving on to the dry and adding the yeast last.
Choose and run a basic dough programme (approximately 2hrs)
Move on to Step 2 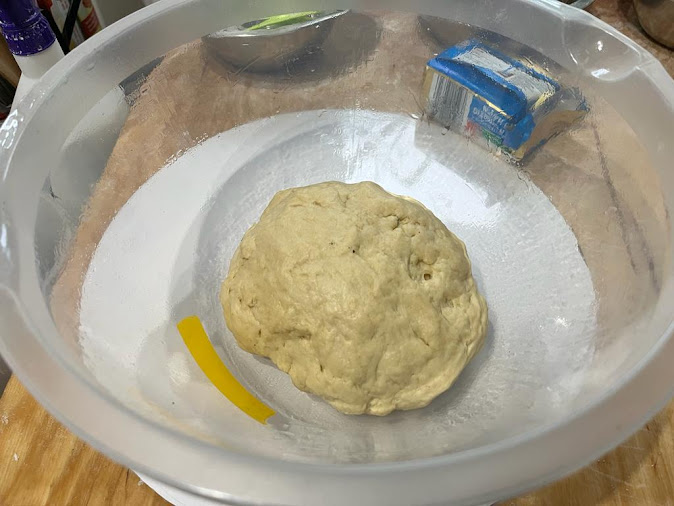 STEP 2
Tip the dough out onto a floured board
Knock it back to remove the air.
Shape the dough out into a rectangle approximately 30 x 20 cms. Don't be too rough with a rolling pin...the dough may not have enough time to recover.
Gently spread the butter over the dough. Try to cover the whole of the dough. Use a little more butter if necessary. 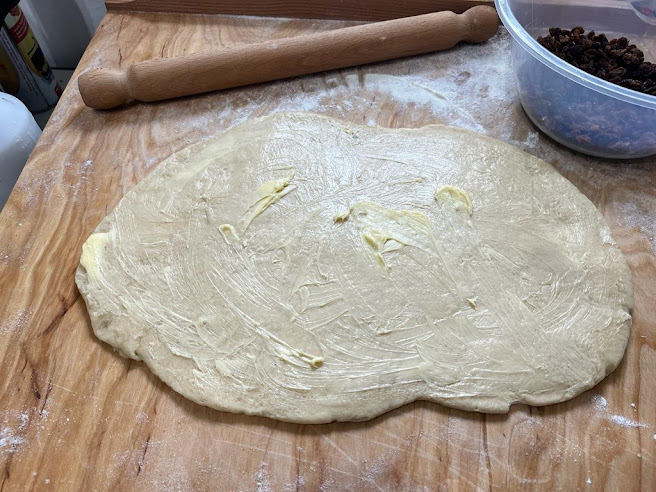 Scatter the currants and chopped sultanas evenly over the butter.
Mix the caster sugar with the mixed spice and sprinkle it over the dough in an even layer 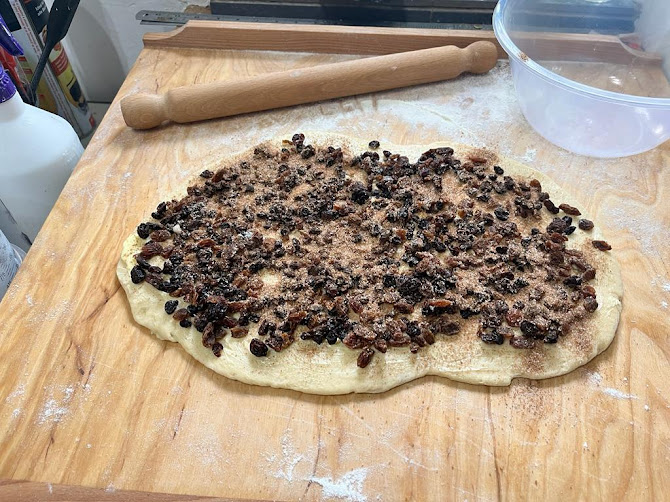 Roll the dough up into a tight tube, starting at the longest edge. (Imagine it's a Swiss Roll - you should have a spiral effect at each end)
Cut into 9 even sized rounds.
Place the rounds on a baking tray (lightly greased or floured) making sure that the cut side is uppermost.  Give them adequate space, and they will expand. You may need to crimp the open edge to seal them. You may also need to place them on a smaller pan so that they help each other from opening up. 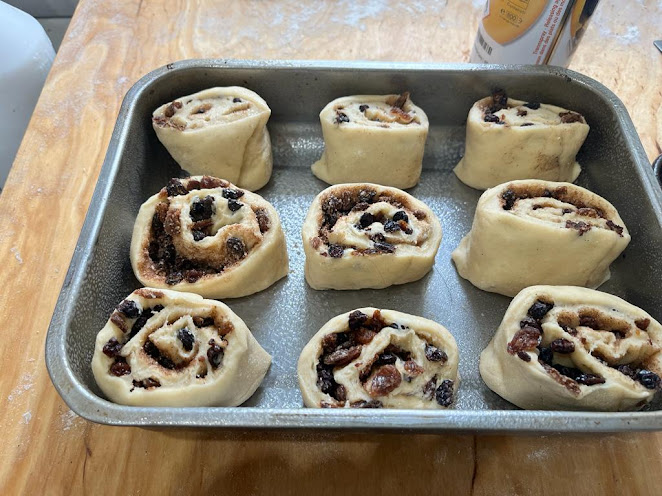 Cover them with a piece of parchment paper and put them somewhere warm (22 - 24 degrees C) for about 30 minutes until they have doubled in size.
Preheat your oven to 180 degrees C
STEP 3
Bake for 10 minutes at 180 degrees and then for a further 10 minutes or so at 160 degrees.
Take out of the oven and immediately glaze using a solution of caster sugar (2 tablespoons) dissolved in 1 tablespoon of warm water.
Leave to cool on a cooling rack. 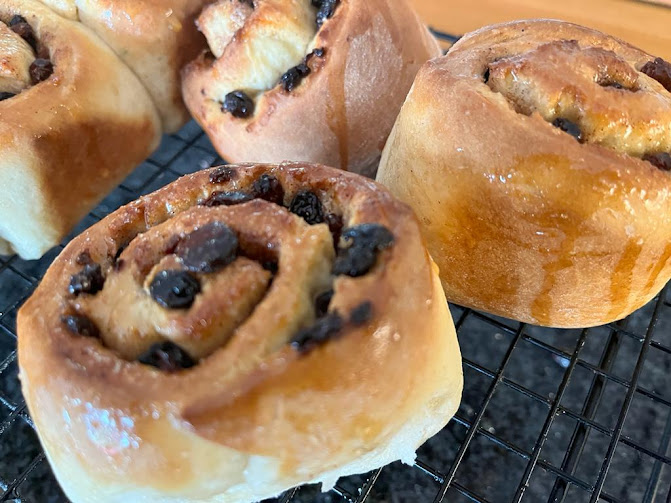