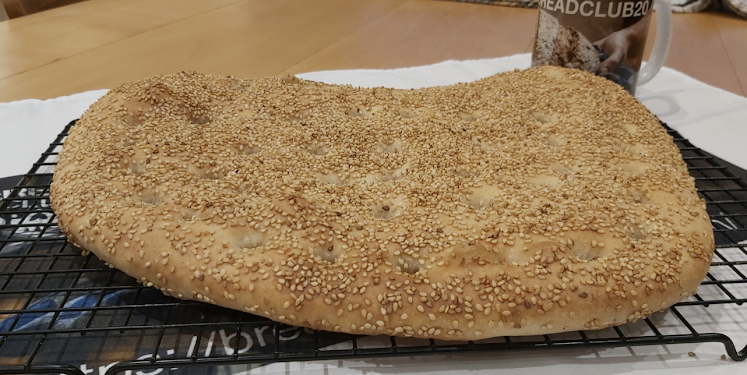 It's very satisfying when someone gets in touch and offers you not only a recipe, but also a story behind it.

So it was, this week, that I received a recipe from Menna, who grew up in the village in which I live, but now lives with her own family in Skiathos, in the northwest Aegean Sea.

Lagana was originally an unleavened bread. It's flat with a crunchy crust and a small crumb. The characteristic aroma comes from the sesame seeds that are used as a topping.

The name 'lagana' comes from the Greek 'laganon' which is a flaky pastry made of flour and water. It's an ancient bread, mentioned by Aristophanes in his text Ecclesiazusae. His character, Horatio, refers to lagana as 'the dessert of the poor".

According to tradition, when Moses led the Israelites out of Egypt, they took with them unleavened bread; it was far easier to transport and also lasted longer.

Mosaic law continued to stipulate that unleavened bread would be consumed throughout Passover.

Nowadays, Ash Monday, the first day of Lent, is referred to as 'Clean Monday' in Greece. It's the day when housewives clean their utensils after Carnival and bakers prepare lagana to be enoyed with various meat-free dishes.

The same dough that makes lagana is also used to make 'Mrs Lent', (Kyra Sarakosti) a figure of a woman with seven legs - one for each of the weeks of Lent, a cross on her head and her hands in a prayer-like position. The figure has no mouth - symbolising fasting.

Lagana, accompanied by honey or tahini is enjoyed throughout the period of Lent.

"We usually eat it mid-morning of Clean Monday", says Menna, "with olives, pickled vegetables, taramasalata, an aubergine dip and halvas. They're all foods for the fasting period. We accompany it with tsiporo, a kind of raki"

10 gms yeast (these days Lagana is made using yeast)

If you're using a machine, add the flour and the salt to the pan and cover with the liquid. Leave to autolyse for fifteen minutes. Add the remainder of the ingredients and choose a short dough programme (45 mins). The proceed to the next stage.

If you're mixing by hand or using a stand mixer, add the yeast and the sugar to the water and leave for 20 minutes. Then add the flour, the salt and the oil. Mix thoroughly and then knead until you have a soft and pliable dough. Proceed to the next stage

Transfer the dough to a lightly-oiled bowl. Cover with cling film and leave on the kitchen worktop in a warm room for 1 - 2 hours, until it has doubled in size. 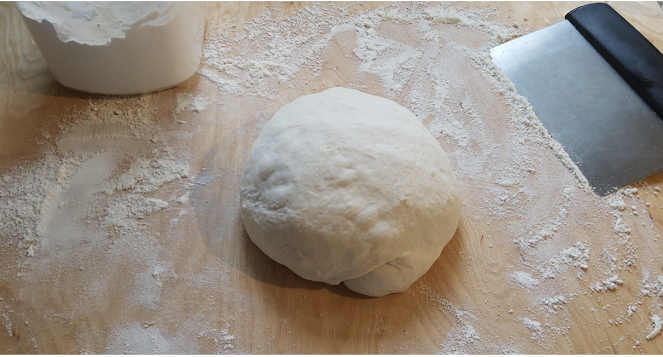 Tip the dough out onto a floured board and knock back.

Cut a piece of parchment paper to fit the size of your baking tray  and flour it lightly.

Dust the dough with flour.

Roll out to any shape or size you like.

Lift the parchment paper and dough and transfer to the baking sheet.

Repeat with the second piece of dough.

Mix the coating (sugar and water) and stir so that the sugar completely dissolves.

Brush the coating over both flatbreads.

Sprinkle the top with a generous amount of sesame seeds. 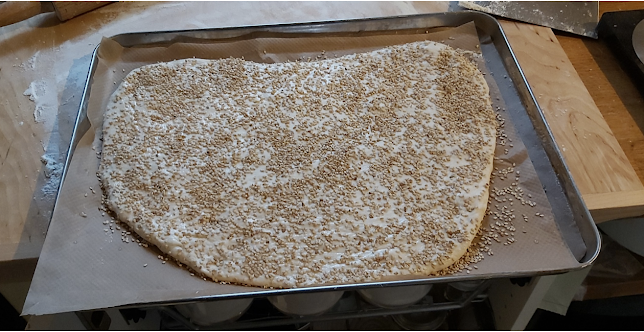 Set aside for 20 minutes to allow them to rise again.

When they have risen, make indentations all over the dough using your index finger. This gives the characteristic 'lagana' effect - it's very similar to the technique you'd use with focaccia. 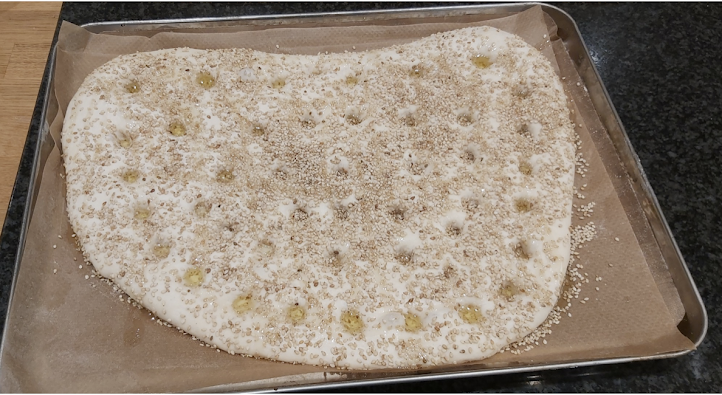 When golden and crunchy, remove from the oven and cool on a rack. 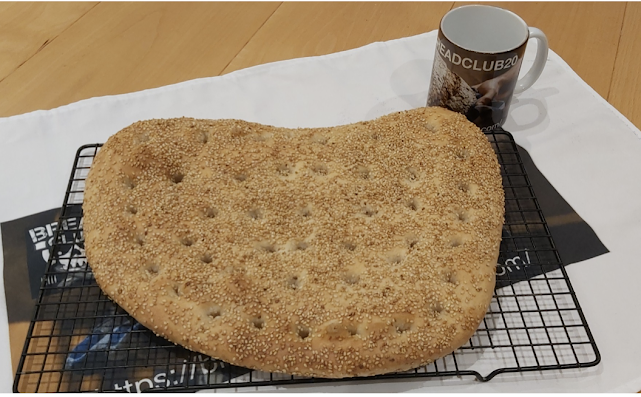 Serve in a traditional Greek manner with:

I also served it with Smoked Mackerel pâte, hummus and salad. It's not 'Greek', as such, but this bread is very versatile. 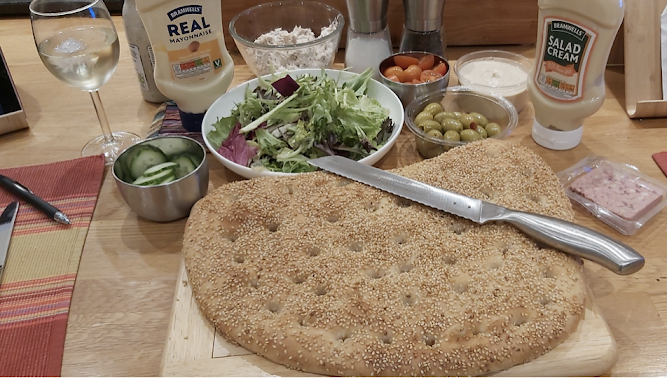