'Granary' flour is actually a registered trade mark of Rank Hovis, used to describe their malted wheat grain flour. Essentially, it's a blend of brown, white, and rye flours to which malted wheat grains have been added.

Other mills produce their own versions; for example, Shipton Mill produce their 'granary-type flour' under the brand name 'Light Malthouse Flour'.

In the same way as the term 'hoover' is used to generically describe all manner of vacuum cleaners and the process of using one on flooring, so 'granary' is any bread made with flour to which malted and cracked grains of barley and wheat have been added.

In the United States, where malted barley grains are almost impossible to find, American producers use barley malt powder and malted wheat flakes to produce a similar product.

'Granary' flour does not start off as wholemeal or wholewheat flour. Rather, its baseline is a brown, white and rye flour with about 10% wheatgerm. It's a good source of protein, fibre, vitamins and minerals. On average, white flour contains about 75% of the original wheat grain, whereas brown contains about 85%. White flour has more of the wheatgerm and bran removed, so, in theory, in terms of 'being healthy' white flour would score below brown; which would score below wholemeal or whole wheat / stoneground flours.

Remember that all flour is fortified. Under the terms of the Bread and Flour Regulations (1998), all commercially-sold flour has, by law, to be fortified with:

The exception is when the mill can prove that levels of thiamine and iron are already present at the correct percentages.

Currently, the Real Bread Campaign (https://www.sustainweb.org/realbread/) continues to lobby DEFRA to have fortified nutrients removed. Now the UK has left the EU, the current situation will, no doubt, be under review.

So, we're going to make malted wheatgrain bread. We're just calling it 'granary bread' because that's a term with which we are all familiar.

Alternatively, you could mix your own. Experiment with blends of wholewheat, rye and strong white flours, malted wheat flakes and sprouted wheat berries......or maybe not!

I'm using Rank Hovis Granary Flour but any alternative would be suitable and possibly preferred. The choice is yours.

'Granary' loaves can be formed in loaf tins, as you would expect to buy from your local supermarket, or in boules, as might be sold at your local baker. The choice is yours.

I'm making one of each.

NOTE : the ingredients below are for ONE loaf. I've doubled up for two.

If you're using a machine, add the flour and the salt to the pan and cover with the liquid. Leave to autolyse for fifteen minutes. Add the remainder of the ingredients and choose a Wholemeal (or equivalent) programme (3hrs 15 mins). The proceed to the next stage.

If you're mixing by hand or using a stand mixer, add the softened butter and the salt to the flour and mix thoroughly. Then add the remainder of the dry ingredients (except the yeast). Slowly add the liquid and then the yeast until you have a sticky mix. Turn the mix out onto a floured board and knead until you have a silky and pliable dough. (There are 'Help' videos and articles in the 'Useful Web and YouTube links' on the lefthand side of this page). Place the dough in an oiled bowl and cover. Leave for an hour somewhere warm until the dough has doubled in size.

Turn the dough out onto a floured board. Stretch and fold the dough, turning it through 90 degrees each time until you feel the dough tightening up. 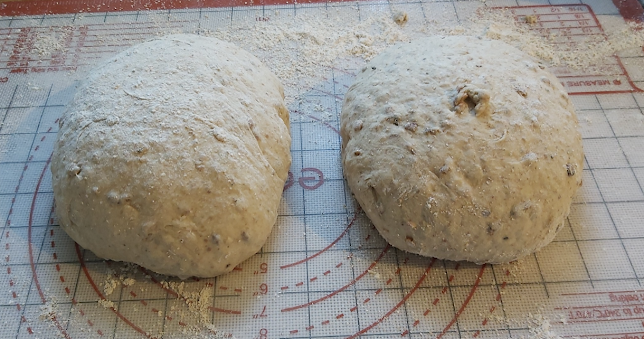 Form it into a boule (or place it in a loaf tin) and place somewhere warm for up to one hour until it has doubled in size.

Preheat your oven to 190 degrees C.

Place the boule on a baking tray or place the loaf tin in the oven and bake for 30 minutes.

Cool on a rack. This bread will freeze

If you like, you can add herbs during the mix stage and make Granary and Herb Bread.

I'd suggest you add: