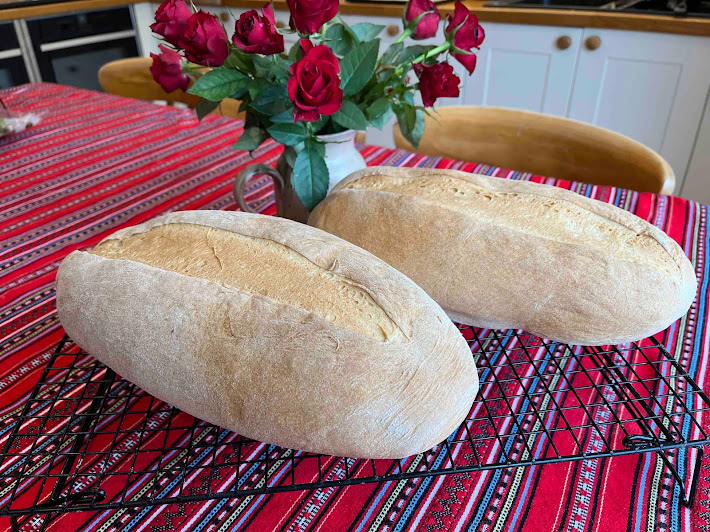 This is a rather special bake. I'm heading into 'iconic bread' territory.

I had a request a while back from Sean Phoenix, a friend, fellow-traveller, educator and writer who wanted a recipe for Po'Boy bread -  just like he had tasted on his travels in Louisiana.

"Po'Boy bread was something special. I remember it was crusty on the surface but soft in the middle, sort of like a cross between a hotdog roll and a french baguette - a bit like Vietnamese Banh Mi bread" (Sean Phoenix https://seanphoenixwriter.wordpress.com/)

That set me off on a challenge.

Po'Boy sandwiches are typically filled with shrimp, other seafood or beef. However, they can also be filled with ham, Louisiana hot sausage, chicken, alligator, rabbit or boudin sausage.

But, the key is in the bread. It is part of American history. It's one of a number of world-wide iconic breads.

The origin of the Po'Boy loaf comes from the French influence of the 18th century. Po'Boy is made with a dough that is wetter than that used for a baguette and so produces a lighter and fluffier bread.

Wheat was difficult to grow in the South, due to the humidity,. Consequently, flour had to be imported. A basic bread was needed that required less flour and therefore, less imported and expensive wheat. It was basic economics.

However, the name 'Po'Boy', itself, dates back to the Depression of 1929 when baker, John Gendusa, of Mirabeau Avenue, New Orleans, was baking bread suited for a particular type of sandwich. The Martin Brothers, Benny and Clovis, had left their jobs as railcar conductors to open up their own grocery store and during the railcar workers' strike of 1929 provided free sandwiches to the 'poor boys of the neighbourhood', being the striking railcar workers. The first sandwiches were filled with fried potatoes and beef gravy. From then on, over the next few decades, the popularity of the Po'Boy grew, the range of fillings developed and the Po'Boy became ever more varied and sophisticated.

The Martin brothers went on to open restaurants across New Orleans and they remained in business until 1972.

These days, if you ask for a Po'Boy sandwich in New Orleans, you've got a good chance it will come on a Leidenheimer French bread stick. The Leidenheimer Bakery started back in 1896 by George Leidenheimer, an immigrant from  Deidesheim in the Rhineland Palatinate, Germany. Originally on Dryades Street, it moved in 1904 to Simon Bolivar Avenue where it remains as the largest producer of Po'Boy bread.
The task that faced me was to produce a bread that is clearly French in influence and yet soft and fluffy enough to soak up a variety of fillings. It has to do justice to the history of the bread as well as being recognisable by social and bread historians, alike.
A 'long' Po'Boy loaf can be anything from 12 inches up to 32 inches in length and will be sold in quarters, halves and 'shorties' - which is any length shorter than a quarter. Some Po'Boy sandwiches are unique: a 'Peacemaker' is always filled with fried oysters. And, if you're in a hurry, you can always ask, "Hey, can I have an alligator Po'Boy, and make it snappy!'
So, where is this recipe from? Well, you won't find a recipe from Po'Boy bread in any modern bread cookbook, well, not that I can locate. So, it takes trawling the internet for references to old Louisiana cooking and matching what you find against recipes provided by keen amateur cooks and food bloggers
Then, it's trial and error....
So, perhaps a note about the finally selected ingredients would be useful?
Flour - most recipes ask for either all-purpose or bread flour. One or two require 'all-purpose' AND ''cake flour'. Here, I have to interpret 'all-purpose' to mean a stronger flour than cake flour. As this is a French-style bread, it should be perfectly in order to use a T55 flour which is stronger than a T45 and yet not as robust as a T65. That way, it gives you the best of both worlds.
Fat - many cooks advocate the use of vegetable shortening. This is highly likely to be authentic as commercial bakeries would tend not to use expensive butter or olive oil.
Salt - I will still strongly advise using sea salt over iodised salt, if only for taste.
Yeast - it's highly likely that a large commercial bakery would use an active dried yeast rather than  fresh, if only for convenience. I'm using instant. I challenge you to tell the difference.
Sugar - I'm using a less refined sugar than would probably be used in a commercial bakery. Again, for taste.
Vitamin C - blogging bakers report regularly that it is difficult to gain height with a Po'Boy loaf. Most use vital gluten. I'm using a small quantity of Vitamin C to give the yeast a bit of ....ooomph! (that's a technical term, by the way ;-)
Length - my oven will never be 32 inches in width, so my Po'Boys are limited to the length of my bread trays. However, there are sufficient historical references to justify me baking Po'Boys that are 12 inches in length and about 3 inches in width.
You may also see that one or two bakers add small amounts of dried milk....I'm not.
INGREDIENTS
780 gms of strong bread flour
473 gms of warm water
25 gms sugar
25 gms vegetable shortening
17 gms crushed sea salt
9 gms instant yeast
½ teaspoon Vitamin C (food grade ascorbic acid)
This produces a dough with a hydration level of 60.6%
Let's go.... 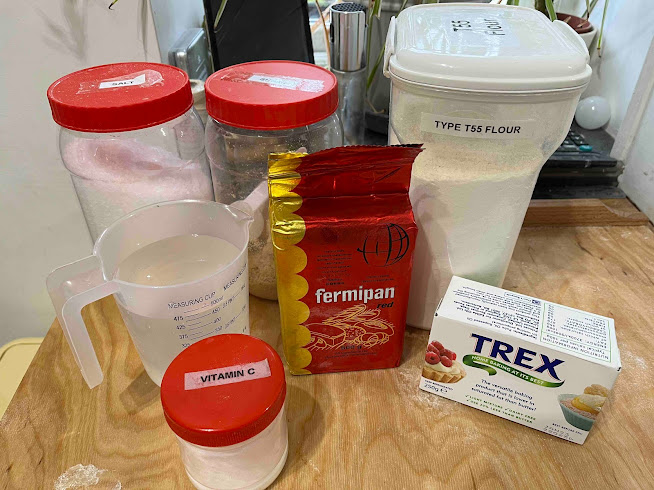 METHOD
Sift the flour into a large bowl and add the salt. Mix well.
Add the shortening to the flour and then add the salt. Mix well and leave for 15 minutes.
Add the yeast and the sugar to the warm water in a separate jug and then leave, covered for 15 minutes.
Add the water / yeast / sugar mixture to the flour mixture and mix well until thoroughly incorporated.
Tip out onto a work surface (no flour) and knead for 8 - 10 minutes until you have a smooth dough.
If you are using a stand mixer or Bread Machine (instant programme e.g. Pizza), stop the machine when the dough is soft and ready.
Oil a large bowl and place the dough into it. Cover and leave in a warm place for at least an hour or until it has doubled in volume.
Pre-shape both portions into boules and leave covered for 15 minutes.
Re-shape into a shape reminiscent of a cross between a baguette and a batard, approximately, 12 - 16 inches long by 3 inches wide.
Place on a baking sheet.
Cover with a cloth and second proof for a further hour or until they have doubled in size. 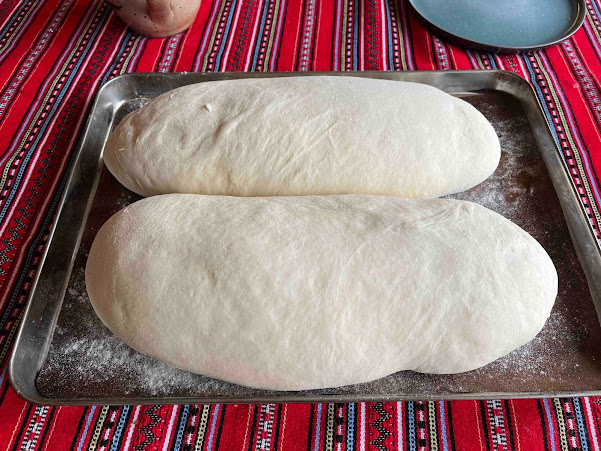 Preheat the oven to 190⁰C (375⁰F).
Ideally, you don't want a really crunchy crust so there is no need for massive amounts of steam. However, we're back to personal choice. If you want a crusty outside, place a small container of boiling water in the oven to produce steam.
Slash the Po'Boy in the middle, down the length of the loaf and then bake for 30 minutes until golden brown.
Cool on a rack. 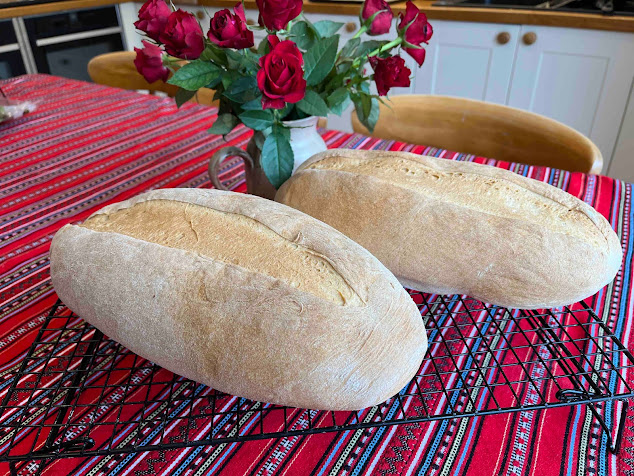 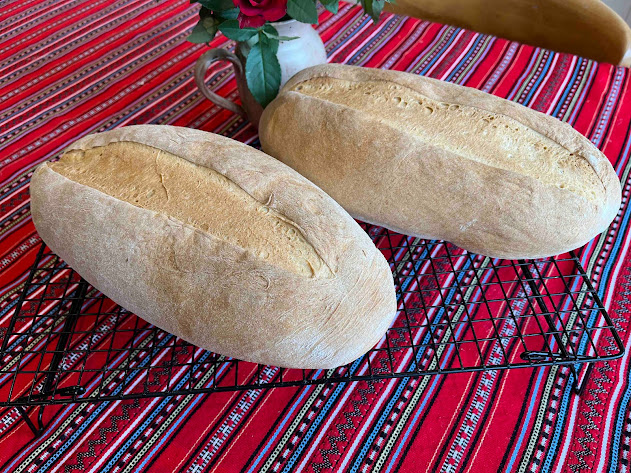 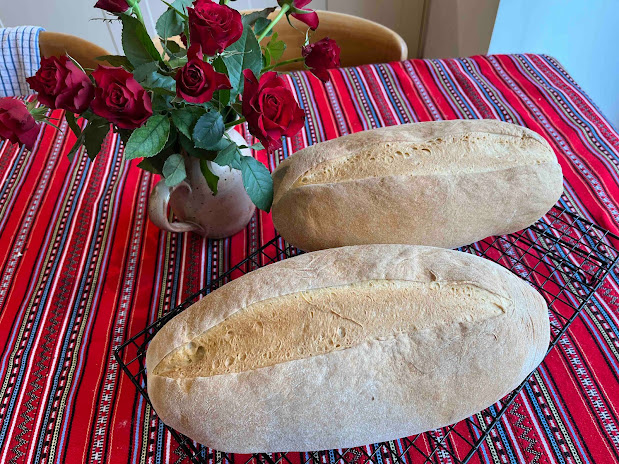 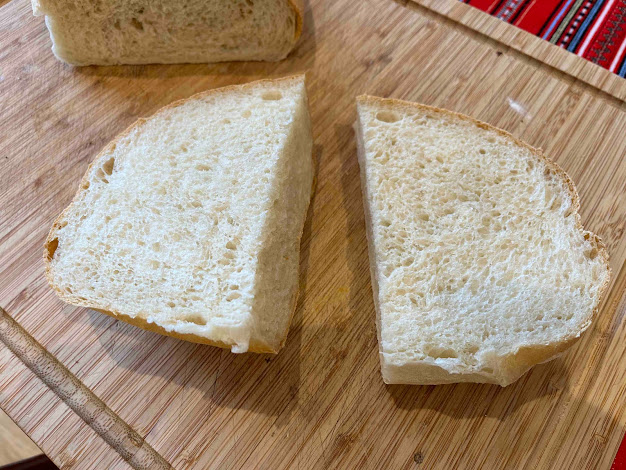 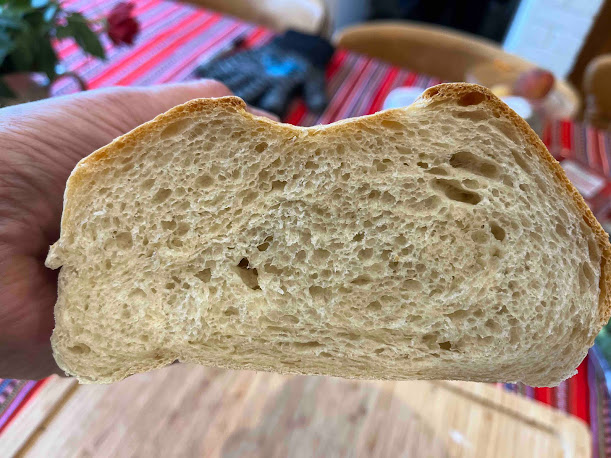 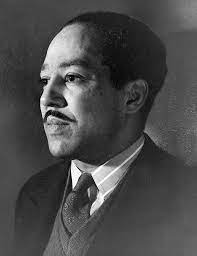