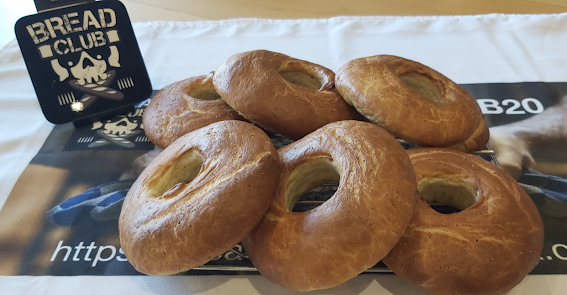 Bagels or Beigels, originated in the Jewish communities of Poland. The first mention of a bajgiel is recorded as early as 1394 in the Royal Household of Kraków. By the 1600s it was often given as a food to a woman during childbirth. It would seem that the German word beugel, meaning ring or bracelet, became the Yiddish word beygal.

The 17th centuries the Ashkanazi Jews of Poland documented varied ways to decorate and fill their bagels.

The distinctive hole allowed the bagels to be threaded onto string or onto wooden rods to enable easier transportation or to make them more attractive to display.

They've been selling bagels in Brick Lane, London since the 1800s and bagels were taken to the United States by immigrant Jews during the 19th and 20th centuries. In New York, the Bagel Bakers Local 338 union controlled the baking, nature of the ingredients and distribution for all bagel outlets across the city.

Bagels are big business....especially as part of modern city centre fast food lunchtime menus. Bagels are a peculiar product, though - a dough that is boiled to stop them losing their holes and to stop them puffing up in the oven and then baked to create a distinctive taste and sheen.

These days, many outlets produce steam bagels where the boiling stage is exchanged for baking in a steam-injected oven. They are quicker to make, softer (like a finger roll) and less chewy. But also less authentic.

By the way, Murray Lender, from Connecticut, whose father Harry formed H. Lender and Sons, one of the biggest pre-packed bagel companies in the United States, also invented the pre-sliced bagel which could be sold in bags straight from the freezer section of the supermarket.

Another nail in the coffin of authenticity.

Today, I'm using a Lékué Bagel mould (available from Amazon at £13.49 for a pack of six moulds) which are made of silicone, therefore they can be used throughout the process - for both boiling and baking. 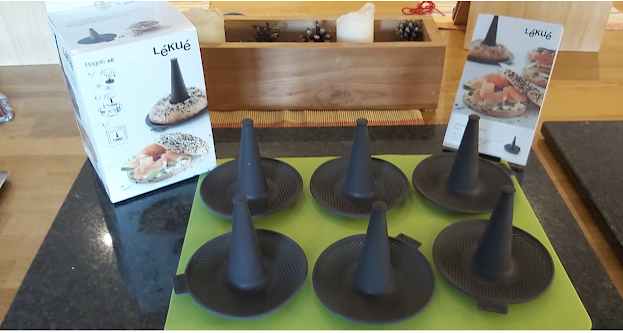 Before we start - a couple of 'nots':
(i) the American bagel is often sweetened. They tend to use Barley Malt syrup as a sweetener. I'm not going to do that;
and
(ii) many of the trendier food shops in our big cities now offer sourdough and wholemeal bagels. I'm not going to do that either, at least not on this bake.
We're going to make and bake an authentic bagel, hopefully similar to a bagel bought at any of the 70 bagel bakeries that existed back in 1900 on the Lower East Side of New York.
Modern day Bagel production in Krakow produces extremely large bagels which are referred to as Obwarzanek Krakowski. There's a fascinating blog posting about modern day bagel production in Krakow at https://ankawell.blogspot.com/2017/02/obwarzanek-krakowski.html (just remember to ask Chrome to translate it for you into English)
INGREDIENTS
(These are the ingredients for SIX bagels. I'm making six because I have six bagel moulds. If you want to make free form bagels, you can double or triple up the recipe as you wish)
230 gms of strong white bread flour
125 mls of water
half a teaspoon of sea salt
27 gms of granulated sugar
28 gms of unsalted butter
2 teaspoons of active yeast
for the boiling
1 teaspoon of bicarbonate of soda
a deep saucepan in which to boil the bagels
If you're hand mixing the dough, prepare as usual. Mix the dry ingredients together and then slowly add the wet until you have a sticky dough. Turn out onto a floured board and knead until the dough comes together and becomes silky. Place in a lightly oiled bowl and keep in a warm place until the dough has doubled.
If you're using a bread machine, place all the ingredients in the pan (add the salt first and the yeast last) and use a basic dough setting (about 2 hrs and 20 minutes)
When the dough is ready, knock it back onto a floured board and divide it up into six equal portions.
Today, my finished dough weighed in at 423gms.....so each portion is 70 gms.
Preheat your oven to 200 degrees C and place a rack low down in the oven.
Boil a pan of water and add 1 teaspoonful of bicarbonate of soda
Prepare a tray and a cooling rack for the bagels when removed from the boiling water
Shape the portions of dough into balls.
Place them over the bagel moulds, shaping them to fit
Leave for 20 minutes
Slightly submerge each bagel mould in turn into the boiling water for ten seconds. After a few seconds they float, somewhat annoyingly. Place on the cooling rack.
When all bagels have been 'boiled', place them onto an oven sheet and, at this point, sprinkle with toppings of your choice. You could use:
poppy seeds
sesame seeds,
cinnamon,
sugar,
crushed oats.....
Keeping the bagels in their moulds....place them in the oven for 15 - 20 minutes at 200 degrees C.
When done, allow to cool on a rack. You can now fill them and eat them....or slice and freeze. It's up to you. 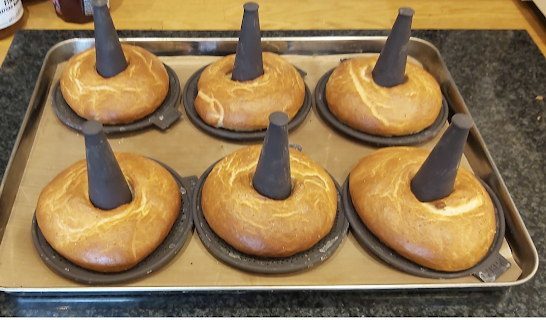 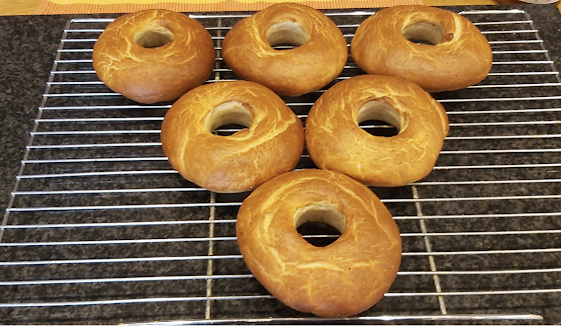