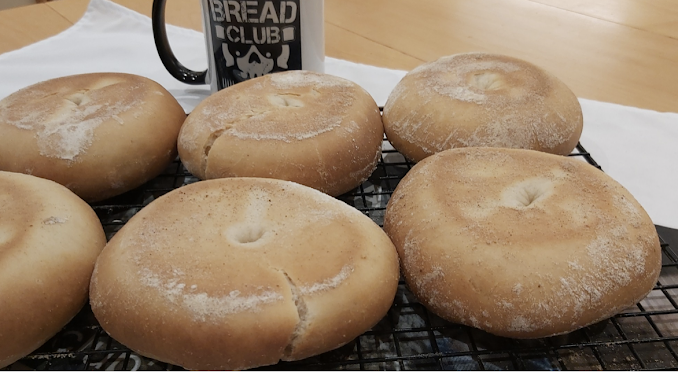 When I was growing up in Manchester, they were called 'barmcakes'. The same word was used for someone who was considered a bit 'daft'. Believe it or not, the terms come from the same source.

And like all breads, there's a story to be told....

Traditionally, a barmcake is a soft round flattish roll that originates from the North West of England. Bakers used 'barm' as a rising / yeasting / leavening agent. 'Barm' is the foam or scum that forms at the top of the fermenting liquid in the beer or wine making process. Breweries would sell barm to the bakers who would use it instead of yeast - even when commercial yeast became available.

Throughout the North West of England, chip shops sold barmcakes filled with chips - the 'chip barm'. Distinct to central Manchester is the 'pasty barm' and the 'Wigan Kebab' is a savoury pie inside of a barmcake.

In 1924, Bert Temple founded the Grand Ancient Order of Froth Blowers, its aim to 'foster the noble Art and gentle and healthy pastime of froth blowing amongst Gentlemen of leisure and ex-soldiers'.

The Ancient Order was disbanded in 1931 but reformed in 2020 when it took the barmcake as its official symbol.

To be 'barmy' is to be weak-minded or idiotic, worth little more than the frothy waste on the top of the fermenting barrel....worthless unless, of course, you were a baker in Lancashire.

But, I hear you ask, when does a barmcake become a bap or a muffin or a bread roll or a blaa or a nudger or a....whatever?

When indeed?  We hold on to our regional breads as the treasures they are.

The oven bottom muffin is the barm cake - quintessentially as Lancastrian as the red rose or even the Mancunian workers' bee. It's flat, soft and ideal for filling.

We're going to autolyse as Stage 1

Mix the flour and the water together and leave covered for 20 minutes. Then proceed to the next stage. If you are using a basic dough programme (2hrs 20 mins) in a bread machine, the initial 20 minutes is usually built into the programe.

Whether you're handmixing or machine maxing, you now need to reach the stage where the ingredients have been mixed, the dough kneaded and then left to prove for about an hour.

If you've been following the many posts on this blog, you'll be familiar by now with the principles of hand mixing, kneading and proving. If you're not, have a look at the resources in the 'Useful web and YouTube links' section on the left hand side of the page.

Take the dough from the proving bowl at the end of the first prove and knock back on a floured board to expel all the air. Weigh the dough and divide into six equal portions.

Take each piece of dough in turn and form into a ball, using your cuppoed hands.

Then, using a chopping board or similar, flatten the ball out into a disc. Don't be afraid of pressing down hard.

Place each disc on a floured or oiled baking sheet (or on a silicone mat). Leave enough space for expansion. Cover with a piece of parchment paper and allow then to rest in a warm place (22 - 24 degrees C) for a further 30 minutes.

You may only manage to place three or four per baking tray.

Preheat the oven to 200 degrees C and place a oven rack low down in the oven.

After half an hour, take the muffins and gently flatten them if they have risen too much.

Using a thumb, lightly press a dent into the centre of each muffin - you don't want to end up with a bagel.

Lightly spray with water and then place the muffins on the tray(s) into the oven for 15 - 20minutes. Half way through, turn them over so that the muffin bottoms become the muffin tops.

Remove from the oven when suitably golden and cool on a wire rack (dent side up, this time). 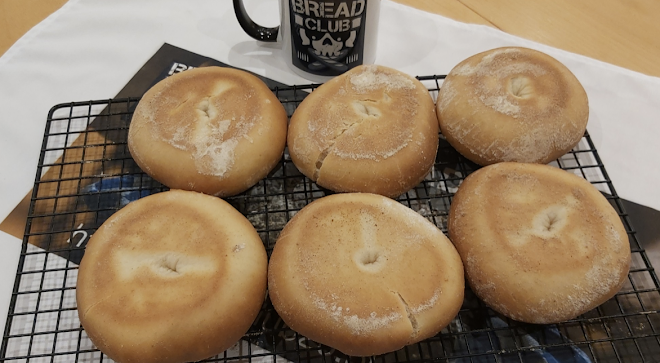 The muffins will freeze or will keep fresh for about 2 / 3 days.