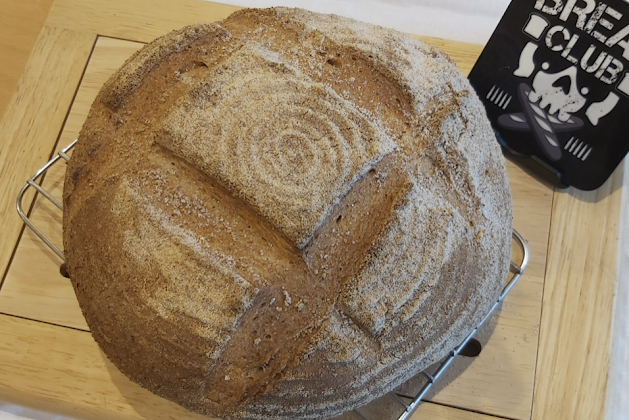 The Pain de Campagne recipe at https://breadclub20.blogspot.com/2021/01/pain-de-campagne.html struck me as a little difficult to handle if you are new or fairly new to breadmaking. The mix is wet and very loose. At 82% hydration, it comes into the realms of 'rustic' or 'artisan' and, for some,  it might feel too close to a batter for comfort.

So, for this recipe ( Pain de Campagne (ii) ), I've adapted the ingredients to give a 75% hydration. This will provide a stiffer dough that should be easier to handle.

In case you've arrived at this recipe as a first port of call, let's start at the beginning.

Traditionally it is a miche - a large loaf of country bread. Whilst it was a sourdough, it was also a blend of flours, for example, rye, wheat or barley; producing a hardy loaf that would feed a large family.

The miche incorporated either natural leavening or was supplemented by baker's yeast. It would be carried to the communal village ovens where it might weigh anything between 1.5 kg and 4.5 kg. - so providing enough bread for a family until the next baking day.

The loaf contained rye as well as wheat flours mainly because the two crops were often grown together. Roughly 10% of wheat flour would be rye and this eventually found its way into recipes.

As with many rural French breads, the pain de campagne fell out of favour at the start of the 20th century in favour of the baguette. It wasn't until the rise of the artisan bakers in the 1970s that the pain de camapgne once again found its way into the boulangerie and onto bakers' shelves across Europe and in the United States.

Traditionally, the natural yeasts are allowed time to develop and the use of a sourdough starter is ideal for this. In addition, the loaf is proven in wicker bannetons to produce the boule de campagne or miche de campagne....or even the pain de campagne!

Of course, as well as producing it in a round banneton, you can also form and prove it using an oval wicker banneton, loaf tins or even a Dutch oven. You can also divide the dough into smaller portions and bake smaller loaves. Or, double up for a mass bake. As ever, the choice is yours.

The recipe calls for a slighly older starter. This doesn't mean it's been lying around the kitchn for weeks. What is required is a starter that has not been freshly fed. For example, I made a sourdough yesterday, so this is the starter I fed the day before yesterday. Any starter that has not been fed for one, two or even three days is fine. What we want is the 'taste'. The active leavening will come from the addition of commercial yeast.

If you want to scale up or down to increase or decrease your quantities, you'll find a useful tool here: http://brdclc.com/?flour=1000&water=75&salt=2&leaven=20

If you're using a machine, add the flour to the pan and cover with the liquid. Stir. Leave to autolyse (just leave it alone) for 30 minutes. Add the yeast, starter and salt (keep the salt away from the yeast) and choose a rapid dough programme - e.g. a pizza setting (45 minutes). Then proceed to the next stage.

If you're mixing by hand or using a stand mixer, add the water to the flour and the yeast and mix thoroughly. Leave for 30 minutes to autolyse. Then add the starter and the salt.  Then mix thoroughly Turn the mix out onto an oiled board and knead until you have a silky and pliable dough. (There are 'Help' videos and articles in the 'Useful Web and YouTube links' on the left hand side of this page). Let it rest for 15 minutes.

Place the dough in a lightly-oiled bowl, cover with a damp tea towel and leave at room temperature (about 20 - 22 degrees C) for 2 hours or in a refrigerator for anywhere between 8 and 12 hours. 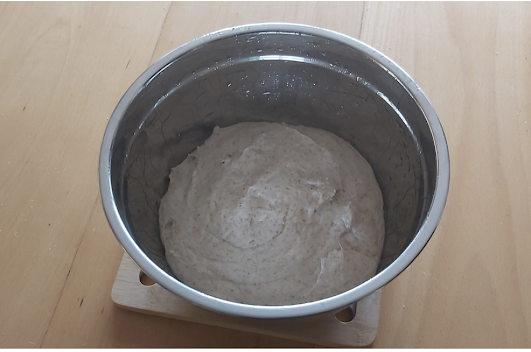 Turn the dough out onto a very lightly-floured board (try to use coarse flour), stretch and fold it until the dough tightens and then shape into a tight ball. Dragging the ball across the board and towards you a few times will help to increase the tension and produce a gluten 'skin' on the boule. It will make it easier to handle

Transfer to a proving basket that has been heavily-floured using rye, spelt, wholemeal or rice flour and cover with a piece of parchment paper. 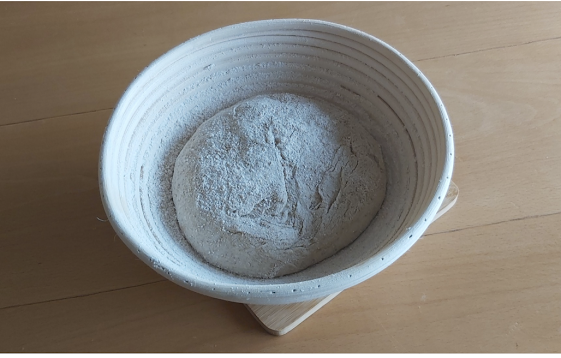 Leave at room temperature (between 18 - 22 degrees C) for up to 2 hours until it has doubled in size. 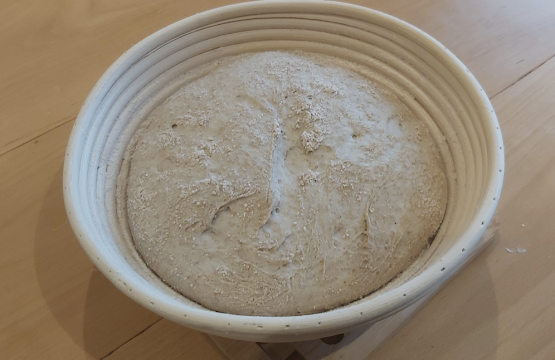 Preheat your oven to 240 degrees C. If you're using a baking stone or a Dutch Oven, remember to place them in the oven when it's COLD.

When the loaf is proved and double its size, turn it out onto a piece of parchment paper. Slash the dough appropriately and gently spray with cool water. 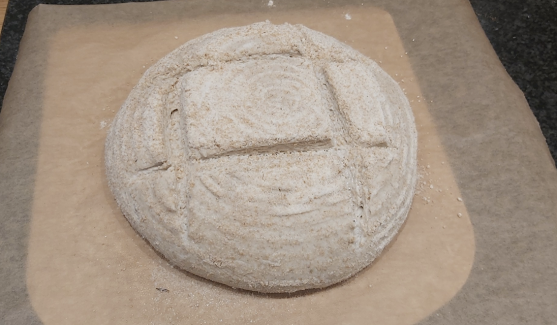 Slide the dough into the oven and turn the temperature down to 210 degrees C.

If you're using a Dutch Oven, remove the lid after 15 minutes and then back for a further 30 - 35 minutes.

When the loaf has a dark thick crust, it's done. 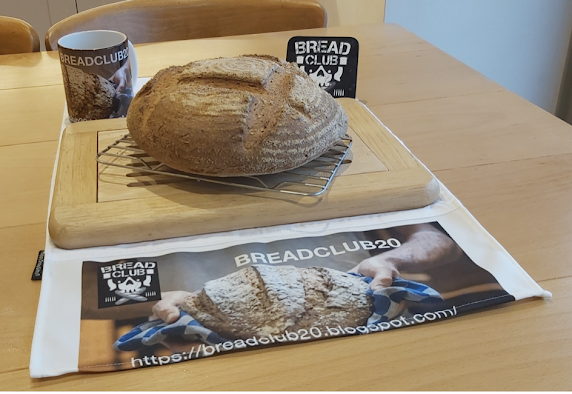 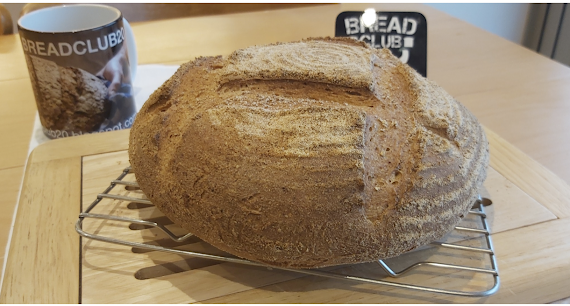 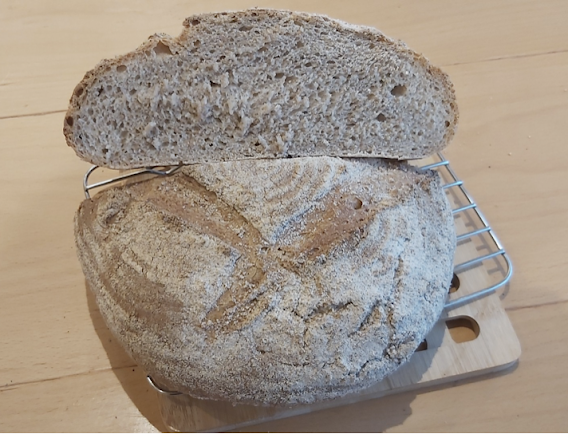