As we run through Lent and up to Good Friday, Easter Saturday and Resurrection Sunday, I thought it would be fitting to make authentic Hot Cross Buns.

In Welsh, we call them Toes y Groes - 'Dough of the Cross'

Like any good bread product, the Hot Cross Bun is blessed with a fair amount of social history.

The concept of marking cakes with the sign of the cross dates back to as early as the 6th century Greeks. The Anglo-Saxons studded their own bread with fruit and marked it with a cross to help it rise when being baked.

However, we can safely say, through documented evidence, that the Hot Cross Bun, as we know it, was first produced by Brother Thomas Rodcliffe a monk at St. Alban's Abbey, 25 miles north-west of Westminster Abbey, London.

The winter of 1360 had been remarkably cold. In fact, the pattern of winters in the first half of the 1300's had been so harsh as to have been worthy of record. In 1351, on Easter Sunday, hailstones had killed both horses and men in the army of Edward III.

In anticipation of an equally cold Easter of 1361, Brother Thomas took the liberty of adding warming spice to the fruited 'Alban Bun', which were distributed to the poor along with a 'basin of sack' outside of the Abbey on Good Friday.

At the time, buns made during Lent, between Shrove Tuesday and up to midday on Good Friday, had to be made without dairy products. The 'Alban Bun' of the 1300s was marked with the sign of the cross as a way of blessing the bread but also because it was believed that it took on the power to ward off evil spirits and also prevented the bun from going mouldy.

By the times of Elizabeth I and James I of England, hot cross buns and other spiced breads could only be sold and eaten on Good Friday, at Christmas or at funerals. As a result, they were not often made commercially but tended to be the product of domestic kitchens.

In Poor Robin's Almanac of 1733, we come across the first recorded street cry of the Hot Cross Bun seller 'Good Friday comes this month, the old woman runs. With one or two a penny, hot cross buns". It's not until the 18th century, that we start to see actual recipes for the 'Alban Bun' which, by then, was known as the 'Good Friday Bun'.

English folklore is always surprising. The hot cross bun found its way aboard ship where it was said to protect against shipwreck. Housewives hung a bun up in the kitchen to protect the house against fires and to ensure successful bakes throughout the year. The bun would be changed annually.

If you buy mazanec in Slovakia or the Czech Republic, or the 'Not-Cross Bun' in Sydney, Australia, you may think you're having a similar product. But there is only one genuine Hot Cross Bun. And here it is....

This will make 12 buns

In addition you'll need a piping bag and a 3mm nozzle. 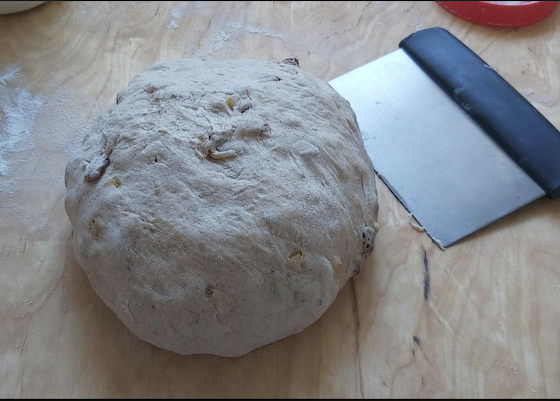 Once it's doubled in size 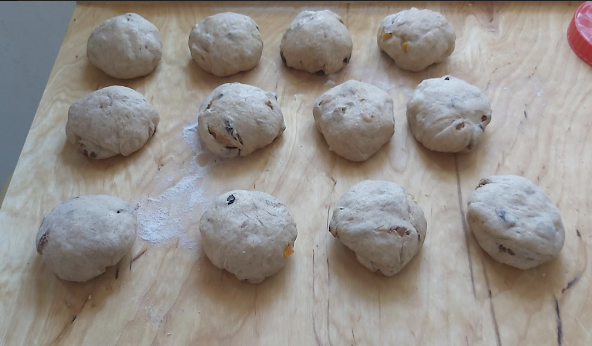 I love Hot Cross Buns toasted for breakfast, smothered in best salted butter. Or, serve them buttered and sliced with a mature Cheddar cheese.

Cheese and fruity, spiced bread is a marriage made in Heaven.

The buns will freeze.

The dough for these buns can be made by machine.

If you're using a machine, add the flour and the salt to the pan and cover with the liquid. Leave to autolyse for fifteen minutes. Add the remainder of the ingredients (except the sultanas and the peel) and choose a Basic Dough Raisin programme (2hrs 20 minutes). The machine will 'beep' when it's time to add the raisins and peel. Then proceed to the next stage.