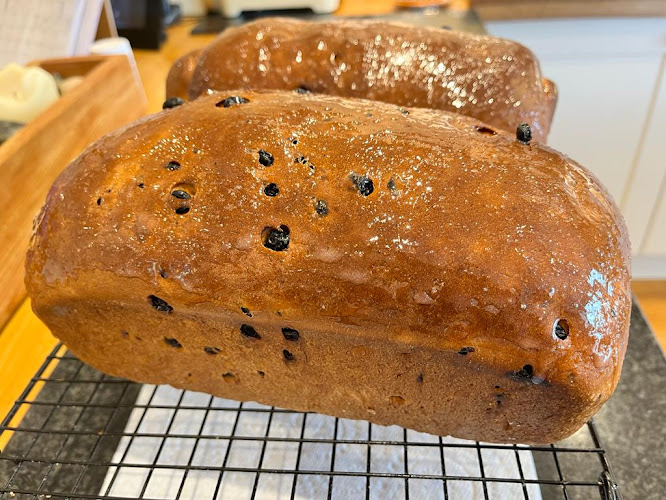 Try going into your local supermarket and asking for Zante currants or Corinthian raisins. Chances are, they'll tell you there is no demand for them, but they do have just plain old ordinary currants.

And they'll hand you exactly, what you're after. For 'currants', as we know them, are actually raisins from the small, seedless Black Corinth grape, originally the main export from the Island of Zakynthos, or Zante.

The grape is first referenced by Pliny the Elder in 75AD but it was nearly a thousand years later before we have the records of Greek producers trading the raisins with Venetian merchants.

Europe has used currants as part of its cuisine for centuries. In the US, however, the white and red grape were only being grown from 1854 and it was not until 1901 that the black Corinth currant was introduced.

Malt Extract is a brown treacle-like substance that is used as a dietary supplement. Early in the 20th century, urban children in the UK took it daily from the end of a spoon to increase their intake of vitamins and minerals - it was usually mixed with Cod Liver Oil to make the latter more palatable.

If you have issues accessing malt extract then there are good substitutes - although there's nothing quite like the extract itself. However, for the purposes of this recipe you can substitute barley malt syrup, or honey, or molasses, or brown rice syrup, or even maple syrup.

Also - 'mixed spice' is a blend of aromatic spices. If you need to make your own:

Mix 1 teaspoon of each of the following: cloves, coriander, ginger.

Mix with 1 tablespoon of each of the following: ground allspice, ground cinnamon, ground nutmeg.

Mix with 2 teaspoons of ground mace and store in a tightly-sealed jar.

50 gms malt extract (or alternatives as described above)

(For fresh yeast : ½ tsp sugar to cream the yeast)

and for the glaze on the top

Warm the malt extract, golden syrup and butter in a saucepan until everything has melted and come together. Take off the heat and leave to completely cool.

Cream the yeast with a little sugar - breaking it down with the back of a spoon and stirring until it becomes liquid. Add a little milk and stir well.

Add the mixed spice to the flour in a large bowl. Add the yeast mixture and the remaining milk and amalgamate.

Add the malt / syrup / butter mixture and blend together until you have a sticky dough.

Tip the dough out onto your work surface and knead for about 10 minutes until you have a smooth and elastic dough. 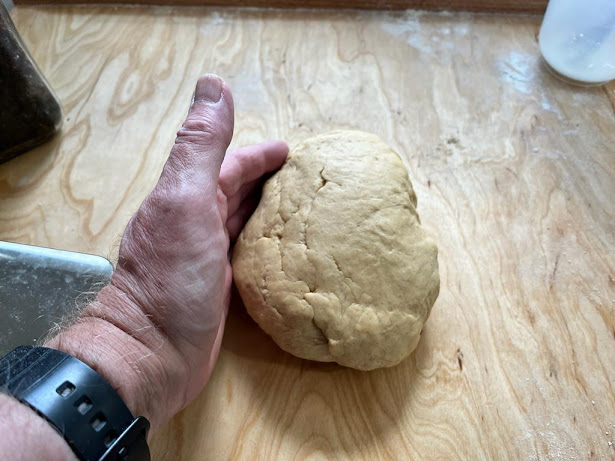 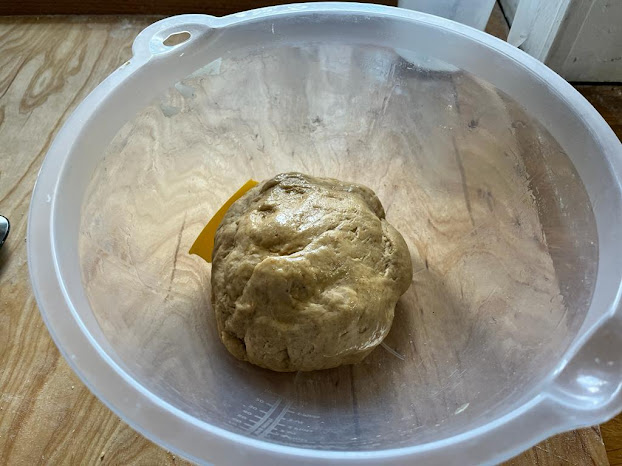 Place the dough in a lightly-oiled bowl, cover, and place somewhere warm for at least an hour until it has doubled in volume.

Tip the dough out onto a lightly-floured surface. Knock it back and knead in the currants.

Divide the dough into two and form each piece into a boule.

Set the boule aside and cover with  a tea towel and leave while you grease two 1lb (450 gms) loaf tins. 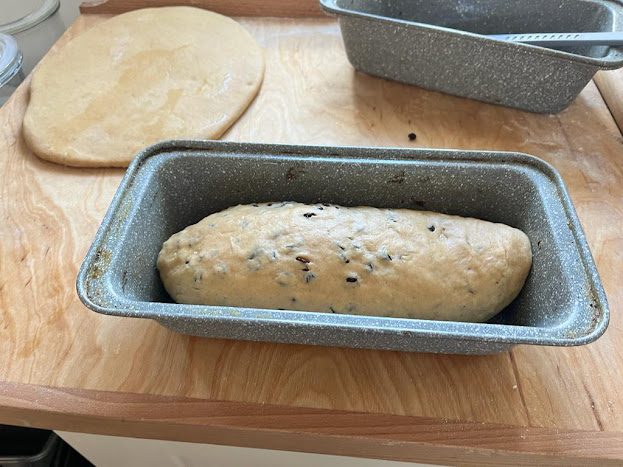 Shape the dough for the tins and then cover. Leave again, in a warm place for at least an hour or until the dough reaches the top of the tins. 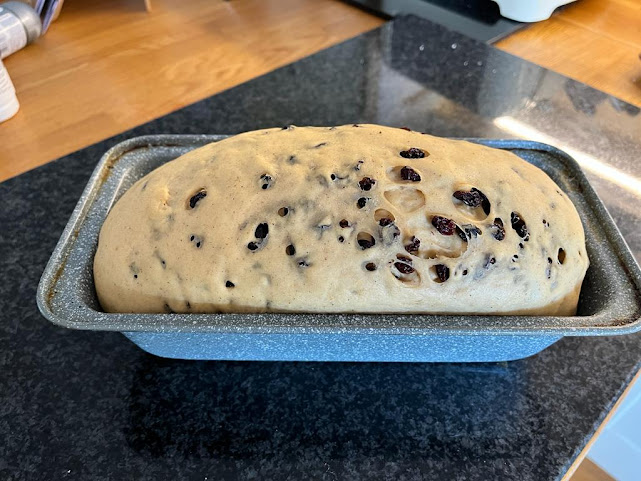 Bake for 35 minutes or so until golden and hollow when tapped underneath. 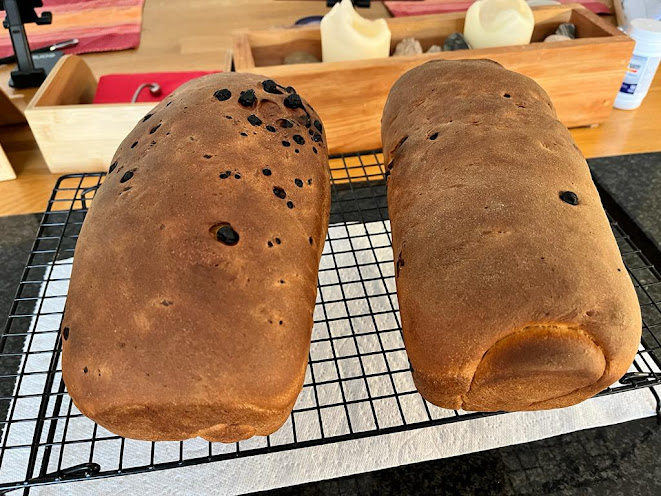 While the bread is baking, heat the milk and sugar together for the glaze. 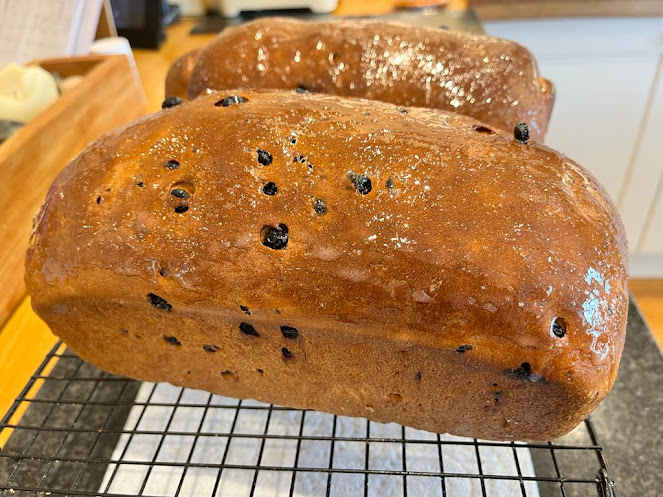 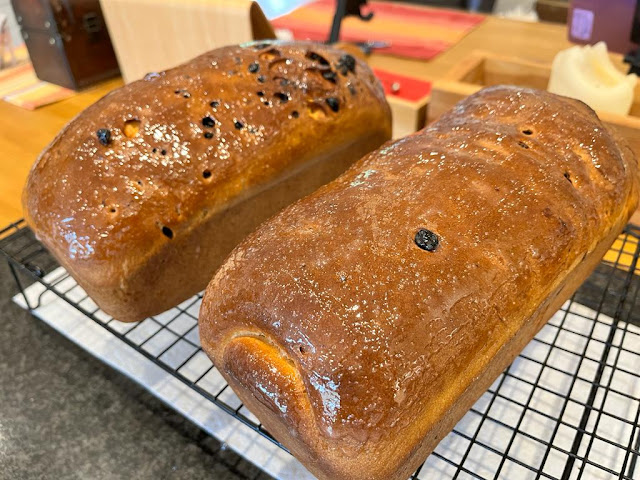 When the loaves are baked, cool them on a wire rack and glaze the while they are still hot. 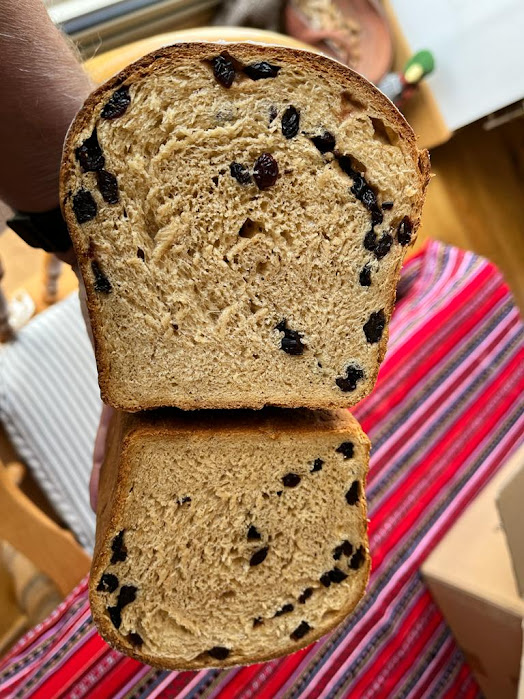 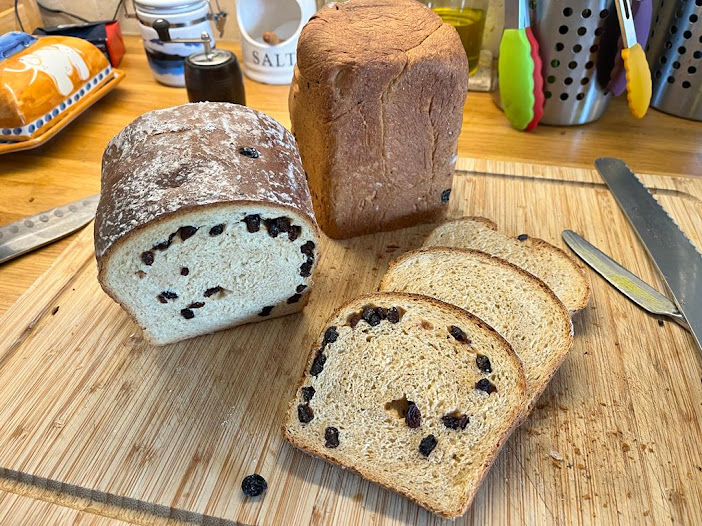