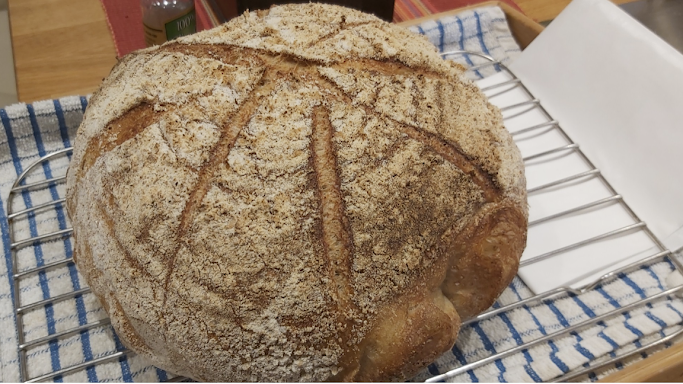 Tartine Sourdough is reputed to be the most popular artisan sourdough bread in San Francisco. It takes its name from the Tartine Bakery at 600 Guerrero Street, San Francisco, home to Chad Robertson and his very own Tartine sourdough, originally baked in a wood-fired brick oven.

STEP TWO - DAY TWO
Take a large bowl and add 200 gms of the starter from overnight.
Then add 650 gms of the warm water
Add the flours and mix well by hand.
Cover with cling film and leave to rest in a warm spot (20⁰C - 23⁰C) for 40 minutes.
STEP THREE
Sprinkle the salt over the dough and sprinkle in the remainder of the warm water (50 gms)
Mix by hand, pinching the dough to dissolve any remaining salt.
Stretch and fold the dough over itself.
Cover with the cling film and leace to rest in the warm spot for a further 30 minutes.
STEP FOUR
Let the dough rise for THREE hours.
Wet / oil your hand and stretch it and fold it by hand every 30 minutes. (stretching and folding FIVE times in total over the 3 hr period)
By the end of the three hours, the dough should be buoyant and aerated.
STEP FIVE
Using an dough scraper and after wetting ior oiling your hands, gently coax the dough out of the bowl onto a floured work surface.
Lightly flour the dough and divide it into half using the scraper.
Using the scraper, flip each piece so the floured side is on the bottom
STEP SIX
Shape each piece into a boule by gently folding it over itself from the sides.
Draw the boule towards you and then repeat the process to encourage the gluten to firm up the 'skin' of the boule.
Cover with a piece of parchment paper that has been lightly oiled and leace to rest for 10 minutes.
Dust two large bannetons with a 50:50 mixture of rice flour and wholemeal flour
STEP SEVEN
Taking each piece of dough in turn, flip the dough over and reshape. Then draw the dough towards you, away from you and towards you again to rebuild tension in the skin of the dough. Repeat this using all four sides of the dough. A scraper might make this easier than trying to do it using your hands.
Place the dough in the banneton, seam side up.
Make sure the seam is closed - pinch it if needs be.
Cover with oiled cling film or parchment paper and leave at room temperature for no less than 2 hours and probably more like 4 hours. You're waiting for the dough to rise and look 'puffy'.
STEP EIGHT
Place a dutch oven or cast iron casserole pot in the oven and then preheat the oven to 240⁰C or as hot as you can set your oven.
Carefully tip the banneton out onto a piece of parchment paper. The easiest way to do this is to put parchment paper on the top of the banneton and then put either a baker's peel or a tray on top of the paper and then invert all three.
Dust the dough with the mixture of rice flour and wholemeal flour and score the dough as desired.
Remove the hot Dutch oven / casserole dish from the oven and carefully place the dough into the pot.
Replace the hot lid and place the pot back in the oven.
Immediately reduce the temperature to 230⁰C.
STEP NINE
Bake for 20 minutes with the lid in place.
Remove the lid and continue to bake for 30 - 35 minutes until the crust is deep brown. (The inside temperature of the loaf should be about 97⁰C).
Cool on a wire rack.
If necessary, repeat with the second loaf. 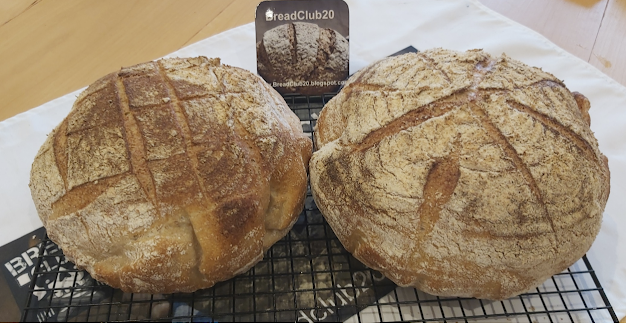 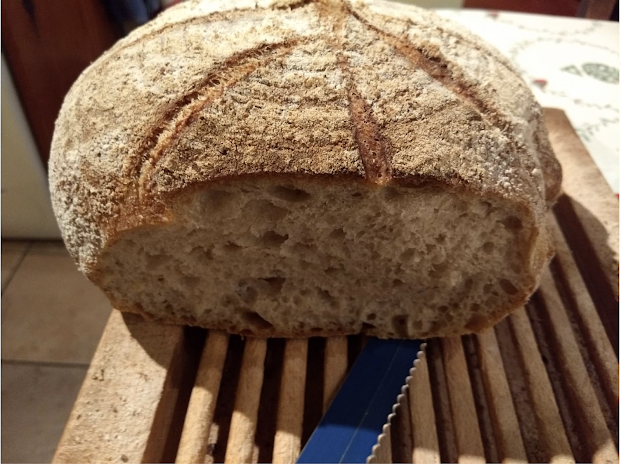