Crusty Cob - the start of your bread journey! 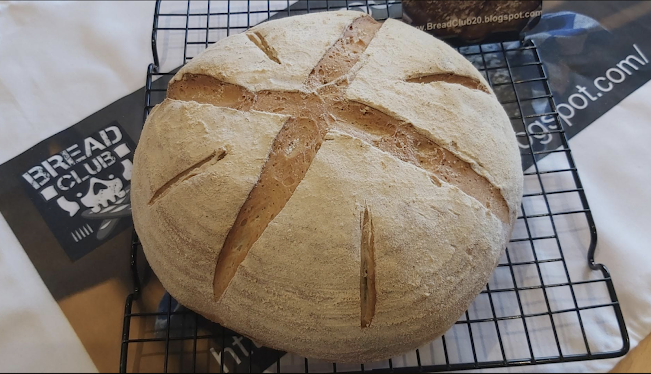 I had a request from a friend this week. 'Can you steer me through a basic boule? I don't have a bread machine or any 'fancy' equipment.'

My friend wants to start bread making and there's nothing worse than becoming disillusioned early on. But, there's nothing better than being rewarded by a successful first loaf at the start of a bread baking journey.

So, Rosie, we're going to cut back on all the frills and make a straightforward, but delicious, Crusty Cob.

There's nothing new in a Crusty Cob. It dates back to Medieval times and was one of the family of 'oven bottom' breads. It's the word 'cob' that gives the game away and dates it so early in our history, It's a word that originated in the Leicester area of the Midlands and denoted any round bread, small or large, that was baked on a tray in the village oven. It was originally a wholegrain loaf but it can be adapted to whatever you have to hand. I suppose the origin of the word could be linked to 'cobs' as in 'cobblestones' - hopefully because of the similarity in shape and not the texture!

How long does it take?

10 gms of salt (preferably sea salt, if at all possible)

40 gms of softened butter (I use unsalted, but it really doesn't matter if you only have salted)

Now, tip the dough out onto a lightly-floured board or worktop and begin the kneading process. Set an alarm for 10 minutes or make a note of the time on the clock. Put the radio on or some of your favourite music...or an audible book. Just something to take your mind off the fact that ten minutes suddenly becomes a long time.Make a ball out of the dough.

Pull the far side of the dough towards you - folding it it half.

Turn the dough through 90 degrees. Flatten it out, fold it towards you again.

Then repeat the process, only this time, using the heel of your palm, or knuckles, or both, flatten the dough so that you're pushing the dough down and into itself. When it's a reasonable size - 'plate size' for example, fold it over itself (in half), turn it over then turn it through 90 degrees and start the whole process again.

It's a workout. If you can't feel it in your upper arms, you're not working the dough enough.

When you've been at this for ten minutes, bring the dough together into a ball and gently pull it towards you on the worktop. Repeating this process will create a smooth ball that has surface tension. This is the gluten that has been formed and will be what will turn these simple ingredients into bread.

Pop it back into the bowl and cover with a tea towel.

Place it on the worktop, preferably away from draughts in a room that isn't cooler than 18⁰C and not warmer than about 22⁰C.  Leave it there for TWO hours. (put a timer on to remind yourself). Mine goes on top of the hot water tank in the airing cupboard....and I leave the door open unless we've used the hot water for showers and the like.

This stage is referred to as the first proving or first proofing. It's sometimes referred to as 'first fermentation'. It's a really interesting word that dates back to Germany in the late Middle Ages. Beer brewers had to 'prove' that their beer was intoxicating because of the yeast and not because of any other ingredients that might cause serious harm to the drinker. They mixed a small quantity of the beer with flour. If the mixture rose, they were in the clear and could sell their beer. When they started to introduce yeast into bread making, the term 'proof' or 'prove' was adopted for the process of fermentation.

If you really feel you need a visual guide to kneading, there's an excellent short YouTube demonstration at https://www.youtube.com/watch?v=ySOj0fFWo1U 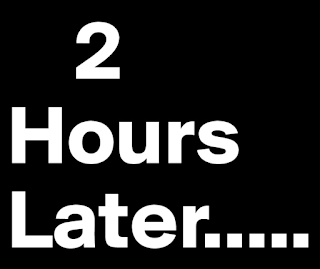 After two hours, the dough should have doubled.

Line a baking tray with greaseproof or parchment paper. If you have neither, generously flour the tray.

Tip the dough out onto a very lightly-floured board and 'knock it back'. (The Americans refer to this as de-gassing). This is basically flattening it to remove the air from the dough. It's not a 'pummel', just a gentle 'flatten'. In removing the air at the end of the first prove, you generate a more even dough.

Then tuck the edges underneath the dough and turn it over to form a ball or boule. Place the boule slightly away from you on the worktop and with the edge of your palms at the back, cup your hands and bring it forward towards you. This will help develop surface tension and also help form a tight boule.

Turn the boule through 90⁰. Place it away from you and repeat the process of bringing it forward towards you.

Repeat a few times until you have a nice tight boule. 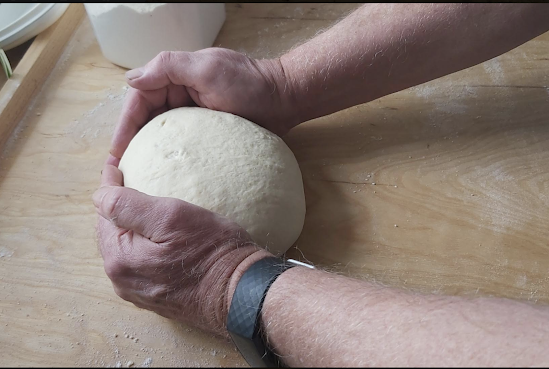 There's an excellent 'How to' YouTube demonstration at https://www.youtube.com/watch?v=hWXA8xFYu9A

Place the boule on the baking tray, cover with a piece of greaseproof paper or parchment paper and return to your 'warm spot' for about an hour.

Another alternative is to place the boule in very well-floured cloth-lined bowl (ideally a banneton, but not specifically) to maintain the structure and then decant the boule onto the baking tray prior to dusting and slashing (see Stage 4 below)

When it's doubled in size - it's ready for the oven.

After about 40 minutes, check it and preheat your oven.

Preheat your oven to 220⁰C (210⁰C Fan assisted) and place a rack in the lower third of your oven.

Gently dust the top of the loaf with flour and slash the dough with an 'X" across the top, working from the edge inwards towards the middle. A razor blade is ideal for this. If you haven't a razor blade, then use a small serrated knife. Failing that, open a pair of kitchen scissors, place both blades in to the dough and bring them together to cut the dough open.

Bake for about 30 minutes until golden brown.

Remove from the oven. If you tap the bottom of the loaf, it should sound hollow.

Cool for at least an hour on a cooling rack. 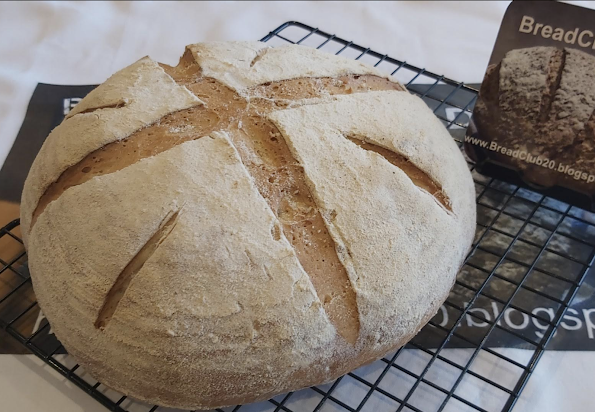 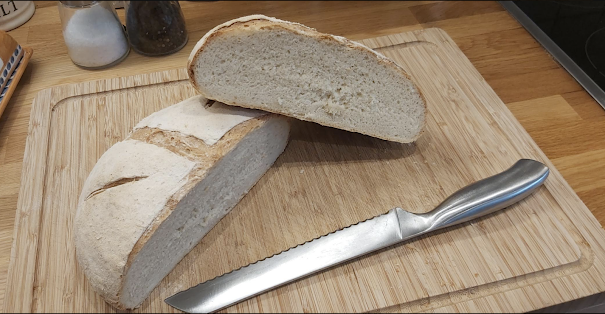 This is a medium loaf. If you want to make a larger one, simply scale up all the ingredients - you'll need 600gms of flour and then the same proportional increase for the rest of the ingredients.

This bread will freeze. .