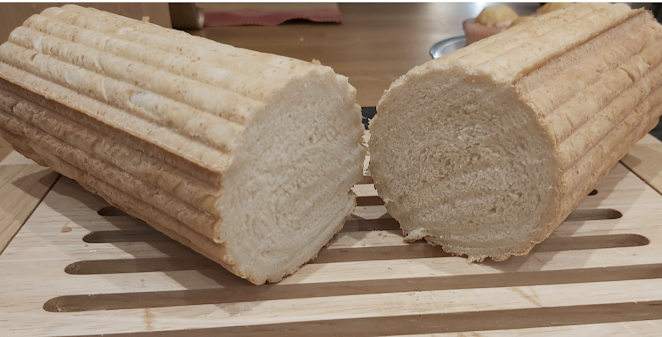 As a lad, living in the North of England, I always felt sorry for people who had never tasted Milk Loaf.

Apparently, Milk Loaf or Milk Roll as it was known, originated in Blackpool. Warburtons launched their 'Blackpool Milk Roll' back in 1969 and it's still available today.

Milk Roll / Loaf is traditionally a soft and light white bread with a soft crust. It's made in a round mould that gives indentations as a guide to cutting perfect round slices for sandwiches. The soft crust is due to the loaf being encased and, in effect, steamed. In the 1950s and 1960s, it was favoured by mums as a bread for children because it was rich in calcium.

In times gone by, it was also known as the 'Lodger's Loaf' because landladies could accurately measure the slices for tea or for 'butties'.

DON'T BE PUT OFF BY THE NEXT SECTION - IF YOU DON'T HAVE A SPECIALIST PIECE OF EQUIPMENT, THERE IS ALWAYS A 'WORKAROUND'.

Milk roll moulds are not easy to come by. I've had one for Christmas, all the way from China via Amazon. Granted, it took a while to arrive and it wasn't cheap, but it's built to last forever.

Lakeland used to sell a mould made by 'Mermaid' (manufacturer - Samuel Groves) but these seem to have been discontinued. Let me know if you find an alternative source. (BreadClub20@gmail.com)

However, they are still available from here: 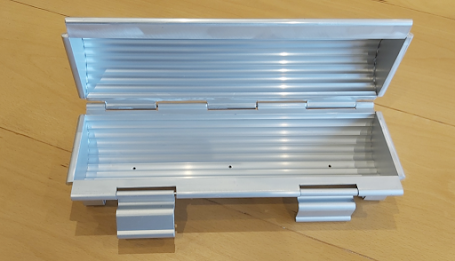 It measures 8 cms in diameter by 29 cms in length. You'll see my loaf mould doesn't have indentations that help you to slice it across the diagonal. Instead it'll produce length way patterning. It's not a problem...only for Northern pedants!

HOWEVER, IF YOU DON'T HAVE A MILK ROLL TIN, REMEMBER THAT A 2lb  LOAF TIN WILL DO JUST AS WELL. THE TASTE WILL BE THE SAME.

Milk Roll / Loaf is traditionally a soft and light white bread with a soft crust.

Half a teaspoon of sea salt

If you're mixing by hand, place all the ingredients into a bowl and bring together into a sticky dough. Turn out on to a floured board and knead until you have a soft and pliable dough. (There are guides as to how to knead bread on the left hand side of this page). Place in a lightly oiled bowl, cover and leave at room temperature until it has doubled in size.

If you're mixing by machine, place the flour and the salt in the pan, add the milk, butter, honey (or sugar) and yeast and choose a basic dough recipe.

Turn the dough out onto a floured board and gently stretch and fold in thirds, turning through 90 degrees with each stretch and fold. This technique is explained in more detail in 'How to build tension in bread', available from within the 'Useful Web and YouTube links' at the left hand side of this page.

Oil or flour your milk roll mould or loaf tin. Be generous with the oil or milk - it will prevent sticking.

Place in a warm place for about an hour. (if you're using a loaf tin, cover in cling film and keep an eye on it to prevent it rising too far beyond the top of the tin). If you're using a milk roll tin, you should have a peep hole either in the top of the bottom. It'll be a good indication when the dough has filled the container.

Preheat the oven to 190 degrees C

Allow it to cool for two or three minutes in the tin and then carefully turn the loaf out onto a cooling rack. 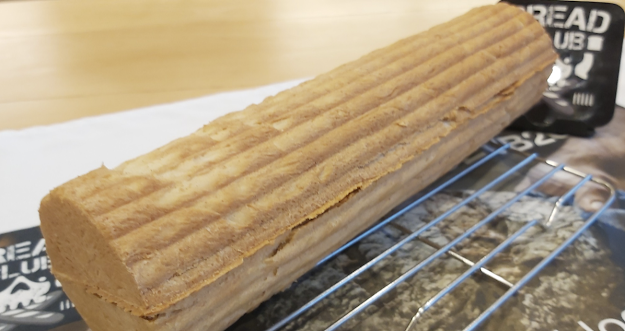 Try and slice it in even slices - that Billy Weaver in the back single eats too much anyway!