Sourdough - Using an 1898 starter, born of the Klondike Gold Rush. 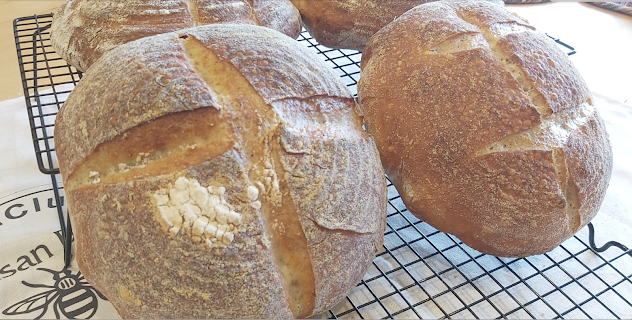 BreadClub20 is on Facebook (just search under BreadClub20) and links to this website at www.breadclub20.com  Why not drop by?

A week or so ago, I received a dehydrated powdered sourdough starter. It had travelled 4111 miles to North Wales from Whitehorse in the Yukon area of Canada. I'd like to think that it may well have been handled, as it left Canada,  by one of the half a million Welsh descendents who now live there. 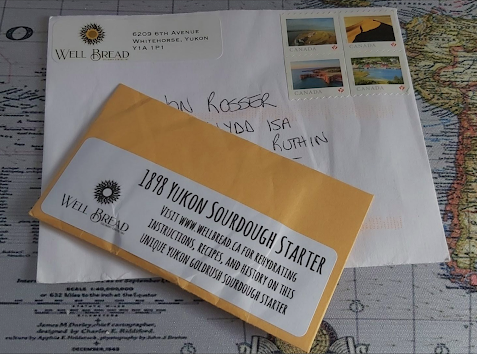 And the story begins here....Long ago, back in 1897, Wesley Ballentine left St. John, New Brunswick for the Klondike Gold Rush. The following year, he arrived in the Yukon with his four sons, John, David, Allen and Jim.

They brought with them a sourdough starter that had originated in California. DNA tests from the Puratos Laboratory in Belgium show that the starter originated along the Chilkoot Trail during the California Gold Rush.

Today, Ione Christensen, whose great-grandfather was Wesley Ballentine, still tends the original starter - the same one we're using for this recipe today.

Ione's grandfather married his Irish bride in Dawson City in 1900 and they had four daughters and one son. 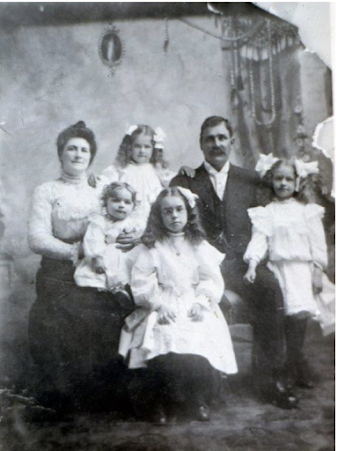 Ione's mother and one of her sisters diligently kept the starter going and the original starter has never left the Yukon. It now resides in Whitehorse, five hundred miles south of Dawson City and is managed by www.wellbread.ca.

It's from here that you can acquire your own share of 1898 Sourdough antiquity. Resurrect it, reconstitute it and share it amongst your friends and fellow bakers.

Puratos went to visit Ione Christensen as part of a series 'In Search of Sourdough'.  The video adds just a little more provenance to my little bowl of prospecting history.

Gold miners would usually make their bread from a piece of old dough which they kept with them, dough left over from a previous loaf. This habit led to them being known as 'sourdough prospectors'.

Sourdough was probably brought to America by Columbus and the miners most likely had their 'starters' from the Mexicans in California. Legend has it that miners 'cuddled' their starter during cold nights on the trail to keep it alive. During better weather, sourdough for the next bake would often be kept in a sock, ready to be reconstituted for the next day's bake.

The starter I've reconstituted over the last two weeks is a delicate thing. Over a number of days, I've fed it, discarded it and fed it again. I've grown it under almost laboratory conditions. It has been tended and fed on a diet of plain (all-purpose flour), filtered water and white sugar. Unlike the sourdough starter we're used to seeing, it doesn't double or triple in volume. But there are clear signs of life...in the form of surface bubbles and the smell that tells you that it's wholesome and good.

However, you cannot introduce this starter to your flour in the same way as you do when you normally make sourdough. It's too much for it. Over time, it will absorb microbes from our own environment and will become more robust. At the moment, it is a 'petulent toddler' that needs carefully handling. Remember how many times Western explorers almost wiped out indigenous tribes who did not have the antibodies to fight even the common cold? Our starter is like that. It's frail and needs acclimatising.

It also needs a name. All starters need names. That way, we look after them a little more carefully.

This one is called Tagish, after the Tagish people of the Yukon. It seems fitting...

So, let's bake sourdough....I had this recipe from Whitehorse in the Yukon. When you examine it closely, you'll see that it's a Tartine-style sourdough. Quite a lengthy process, but as this is my first bake with such a precious starter, I'm going to stick to what I've been told to do. After all, there will be plenty of time for experimentation at a future date. Hopefully, another 123 years...

170 gms of all-purpose or plain flour (not bread flour)

So, let's prepare the starter.

I'm taking 70 gms of sourdough starter from the fridge and mixing in 170 gms of all-purpose or plain flour and 170 gms of tepid filtered (or own-brand bottled still water) and 13 gms of white sugar. 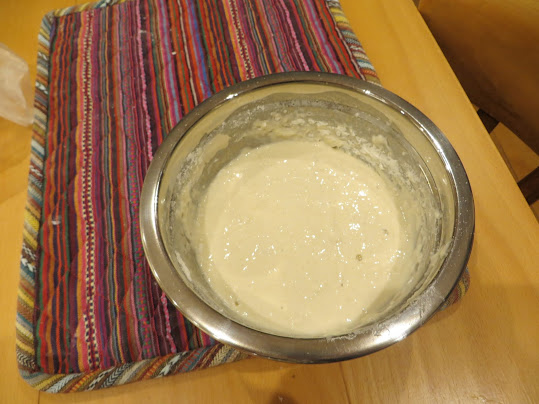 This will give me 493 gms of sourdough starter...so I'll bake a double mix - 2 x 100 gms starter and put the rest back in the fridge for the next bake.

I'm making enough for one large 'miche', but I'll split it at the banneton stage and final proof four separate loaves. the quantities are, therefore, for a double mix.

I'm also adding 1 tsp of instant yeast. Why? Because this is a very young starter and until it has been through a few bakes, the active yeast gives it something of a 'leg-up' until it is strong enough to stand up on its own proverbial feet.

To the levain, I then add 900 gms of strong white bread flour and 100 gms of wholemeal flour.

I make sure all the flour is incorporated, scrape around the bowl and then cover and set aside at room temperature for about 25 - 40 minutes.

After the dough has rested, I'm sprinkling 20 grams of sea salt over the surface and adding the 50 gms of tepid water I retained from earlier.

So, the hydration of this dough will be 77%

As the dough starts to come together, stretch and fold the dough a few times before trasferring it to a clear bowl. Mark the level of the dough on the outside of the bowl.

Place the dough somewhere warm....ideally 25⁰C - 28⁰C for FOUR hours. If you can't maintain this temperature, try at least to provide a consistent temperature and extend the fermentation time until it is billowy and smooth and 'jiggles' when gently moved.

I put my mix in the airing cupboard. In the morning, before we use all the hot water, it maintains a temperature of 27⁰C. This drops to about 24⁰C in the afternoon until the boiler kicks in again and the tank heats up.

Be careful....by the second and definitely bty the third hour, the dough will be emitting gas. Try to save this gas by performing your turns and folds very, very gently.

After four hours, the dough is billowy and smooth.

Tease the dough out of the container onto an unfloured work top.

Sprinkle the top of the dough with rice flour (decide now if you wish to divide the boule into two?)

Turn the dough over so the floured side is on the bottom. 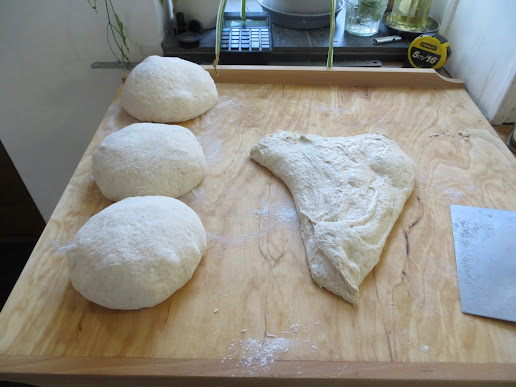 Very gently, preshape into a boule and using the frictin  between the bench and the dough, create tension in the surface of the boule by dragging the ball towards you using the outside edges of your palm. Don't overdo this, once or twice is enough.

Cover the dough with a cloth or parchment paper and let it rest for 30 minutes. 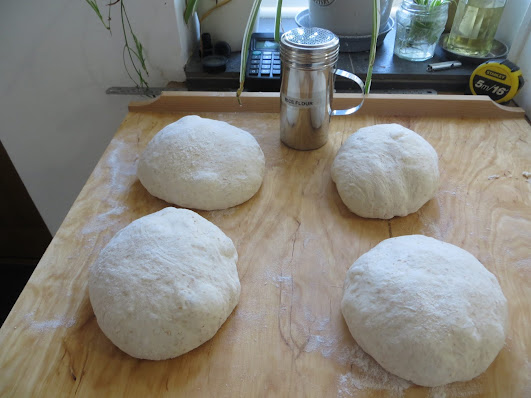 After 30 minutes, take each piece of dough in turn.

Turn the dough over and gently pull the edges into the middle, so forming a tighter boule. Turn the dough so the smooth side is on the top and gently drag the boule towards you to increase the tension on the surface of the dough.

I always flour using rice flour - it's the 'Teflon' of flours - nothing sticks to it.

Repeat with the remaining pieces of dough.

Pre-heat your oven to maximum (240⁰C+). Remember to place your Dutch oven into the oven when it's cold so it preheats. The same applies if you are using a ceramic cloche or roaster.

When the oven has more or less reached heat (after about 10 minutes), remove the dough to be baked from the fridge.

Place a sheet of parchment paper over the top of the banneton and invert.

Dust the surface of the loaf and score it appropriately.

Lower the loaf into a very hot Dutch oven. I like to throw in a couple of small ice cubes to help produce steam. Replace the lid and lower the heat to 230⁰C.

By now, the loaf should be a good colour and the internal termperature should be around 100⁰C.

Place the loaf on a cooling rack, reheat the Dutch oven and repeat until all the loaves are cooked.

Try and leave the loaf for at least an hour, preferably two, before it is cut. It benefits from the resting time  as it helps to set the crumb. 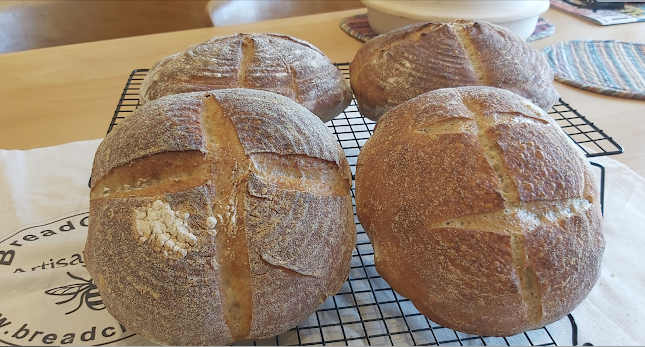 And that's it. Tartine-style sourdough loaves made with a starter originating in 1898 on the Chilkoot trail on its way to the Klondike...in search of gold. 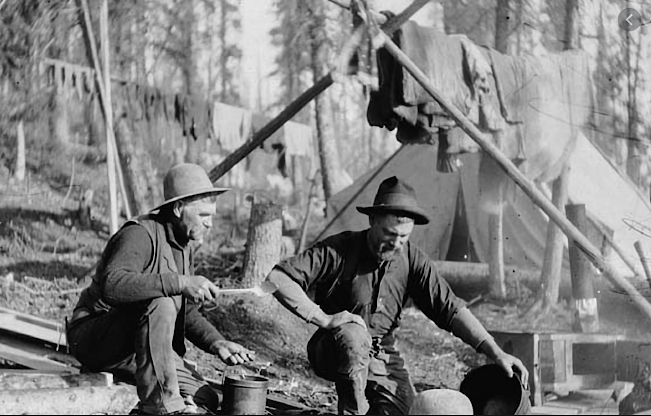 Thanks to Cat McInroy, Chef at the Wellbread Culinary Centre, Whitehorse, Yukon, Ca. for the recipe and for all the guidance to house-training my newly-adopted 'petulant toddler'!

BreadClub20 is on Facebook (just search under BreadClub20) and links to this website at www.breadclub20.com  Why not drop by?

After baking, I decided that the Dutch Ovens could have taken a loaf twice the size...so, instead of dividing the dough into four, next time, I'll divide it into two. The rise was appropriate for the size of the dough and maybe it will improve as the starter strengthens and becomes a little more robust. They are attractive loaves....

and on the inside?