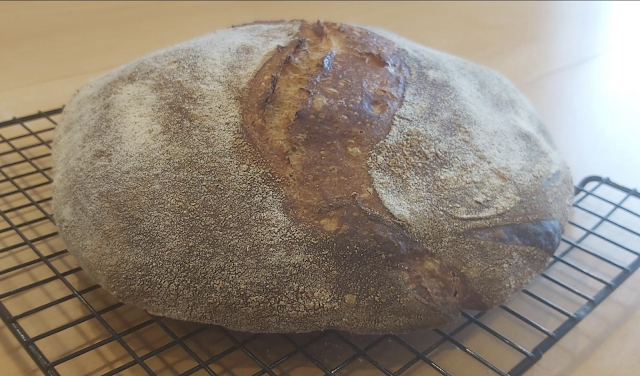 I hope that Michel (I've changed his name for personal security reasons), who hails from the Netherlands, won't be offended if I refer to him as something of a Sourdough Anarchist. It's actually meant as a compliment.

I first came across Michel on Facebook. There's a Facebook group - 'Bread Baking Science' that could easily terrify the new baker or the faint of heart. It's 'Science' with a very large 'S'. However, Michel has been on a mission to demystify the art of sourdough.

The 'proof of the pudding', as they say, is, in this case, that Michel posts online shots of successful-looking sourdoughs....both in the crust and the crumb.

Frustrated with recipes covering anywhere between 4 and 8 pages of close text, he has produced a 42 word recipe and has dispensed with many of the stages and techniques that bakers stress are vitally important, if not essential.

So, what else is there to do but to try and emulate Michel's sourdough by using his condensed recipe and equally condensed approach.

The recipe is as follows:

I should also add that Michel uses a cloche in which to bake, so there is a need to decant the dough from the fridge into a banneton to ease the transfer of the dough into the cloche and oven.

As far as ingredients are concerned, he has an equally condensed list:

Because there will be those of you / us who are wondering 'does this work?'...I'm going to walk us through each stage and, whilst I might elaborate a little, it's only in the spirit of clarity and to provide a little supportive prose!

Note: Why 100gms of starter? That's an interesting question. I've based it on the fact that for a 500 gms flour mix, I'd usually use 150 gms of starter. So, I've pared that down to 100 gms to allow for the fact that this is a small loaf. My starter is spelt flour and water in a 1:1 ratio. I've made 150 gms.  50 gms from the "motherlode" for the recipe and refreshed with 50gms spelt / 50 mls water. I'm using chilled filtered water from the fridge. It's 4 p.m. so it'll be ready at breakfast tomorrow. What's left tomorrow morning will be returned to the fridge.

I'm adding all the ingredients into a large bowl and, using a dough scraper, I'm thoroughly combining the ingredients. Notice, I'm not strictly autolysing or leaving adding the salt until later or anything else. Mind you, waiting an hour is a form of autolysing, to be honest. 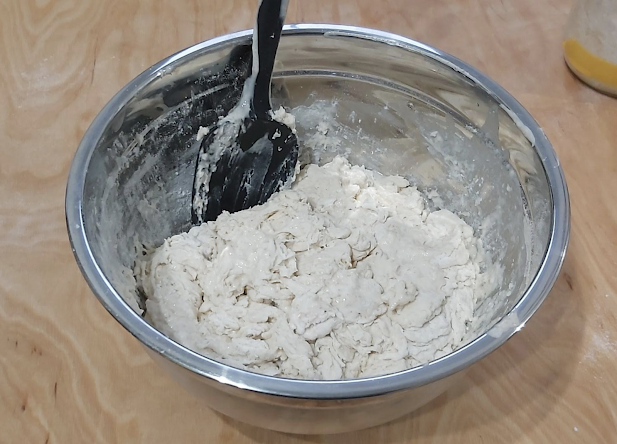 For this, I'm misting my work bench, hands and scraper. Then I misting the top of the dough and turning it out upside down.

My kitchen is at a constant 18⁰C. This process starts at 9.15 a.m. and the dough doubles in volume by 5.10 p.m. (8 hours). It's winter so the temperature can drop to 17⁰C or rise to a staggeringly tropical 19⁰C when we have lunch.

The dough goes into a Pyrex bowl covered with a disposable shower cap. I must add, I don't usually use Pyrex...it's just that it's easier to see the volume increase in this case.

It takes 8 hours to double in volume, as you can see from the photograph. 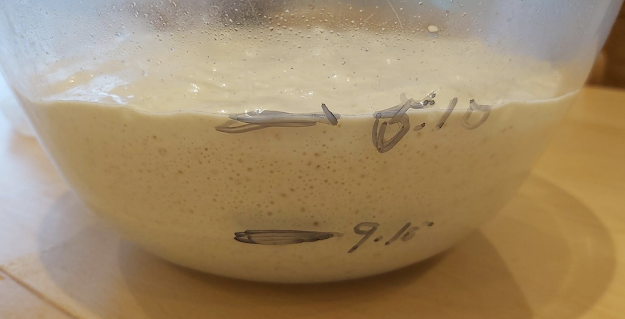 Thinking this through, I want to take it from the fridge to the oven. So, although Michel doesn't advocate pre-shaping or shaping, I'm going to tip the dough out onto a floured board and then perform just a couple of stretch and folds, roll the dough into a boule to try and achieve a little tension in the dough and then drop it into a well-floured banneton. Then, it's going into the fridge. Top shelf. Uncovered.

The top shelf of my fridge is set to 5⁰C. The top shelf is usually the 'warmest' shelf in a fridge. The lowest shelf can be at least a degree colder. It's going in the fridge for 14½ hours, give a minute or two. 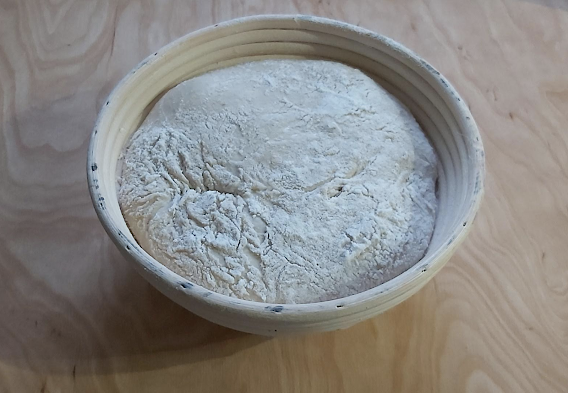 It's been in the banneton and in the fridge for 14½hours.

I'm taking it out of the fridge and letting it rest for 30 minutes to move it a little closer to room temperature and then I'm preheating the oven to 240⁰C. 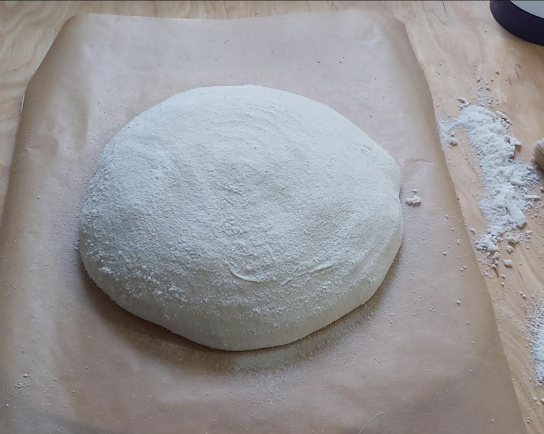 I don't have an actual cloche (truth be told, it's on my birthday list),  so I'm using my own version. I have a pizza stone heating in the oven and also a large stainless steel mixing bowl. When we're ready, I'll mist the stone and the inside of the bowl, slide the dough onto the stone and cover it with the bowl.

The natural moisture in the dough will create its own steam and help the bread to rise. Michel doesn't advocate slashing the dough - he claims that the natural fold in the dough will become the exit route for the rising dough. But I'm giving it a little help, I have to say. 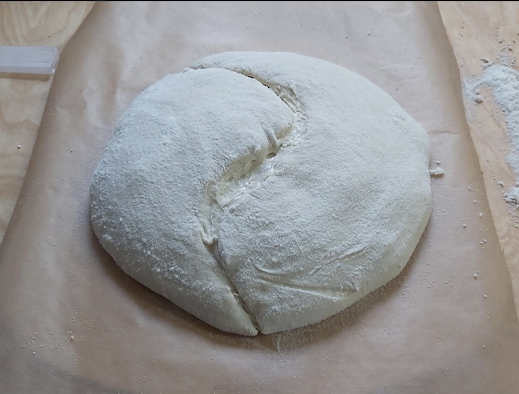 Then, the bread goes into the oven.

After 20 minutes, I'm removing the bowl that covers the bread. The first 15 minutes is when oven-spring happens and during which the bread benefits from its own steam. After that, there's nothing to be gained from leaving the cover in place and, besides, I can now watch the bread rise and darken.

After 40 minutes, it's ready to come out of the oven. It's the right colour and it sounds hollow when  tapped on the bottom. Incidentally, I test the internal temperature and it's at 100⁰C.

I'm cooling it on a wire rack for TWO hours to give the crumb a proper period of time to set. 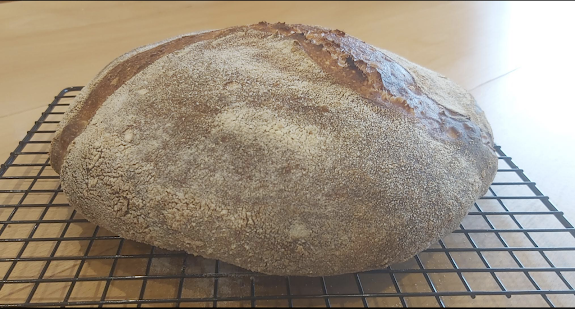 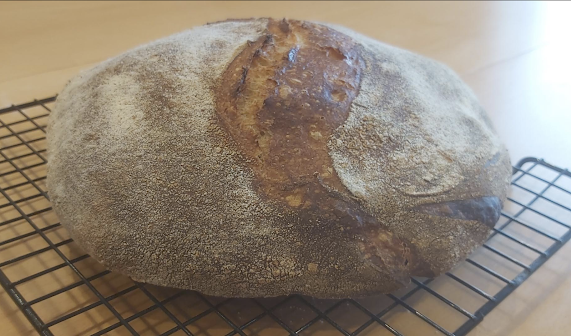 The rise was a little disappointing. Possibly, had I constrained the dough in a Dutch Oven it would have been forced upwards instead of outwards. However, you can tell when you pick up a loaf if it's dense and this isn't at all. The crust 'crackles' as it should when it cools and it's certainly not a pancake. It has good colour and the crumb and taste are both pleasing.

The banneton has a diameter of 19cms and the finished loaf has spread to 23cms. The final height at 8 cms. With more support while baking, could it have possibly been as much as 12 / 13 cms which would have been desirable? Probably, yes.

Although I did score the dough, at 75% hydration, it's still a loose mix and this is evident in the way the score mark has spread.

It's an easy loaf, but while the recipe is reduced in word number, the stages are still there to be undertaken. I still prefer 'Jack's Sourdough' at https://breadclub20.blogspot.com/2021/03/jacks-sourdough.html