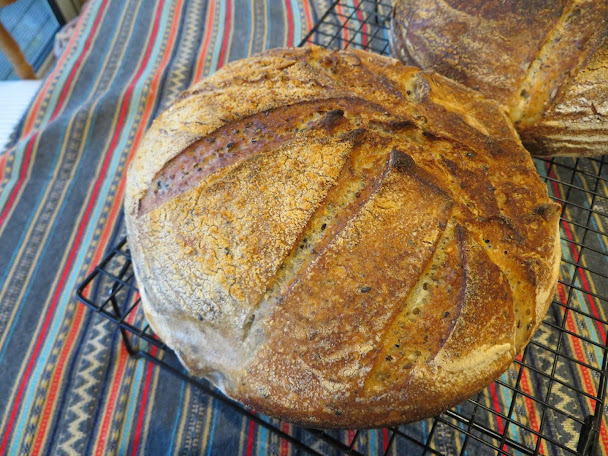 Six Seed Sourdough.....it's the sort of bread that Sea Sick Steve should eat...along with his "Southern Biscuits"... (cue the music....) 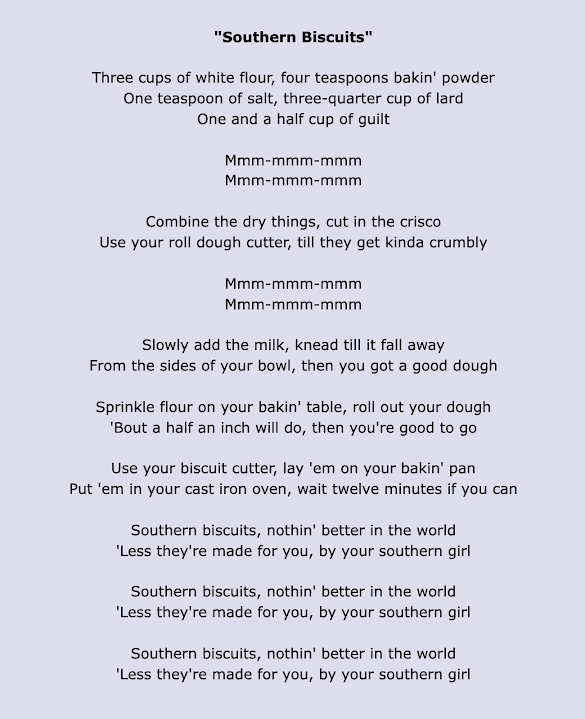 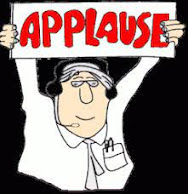 Anyway, Back to Bread and Baking....OK, I'll stop the alliteration...
I'm adding six very different types of seeds to my bread today:
Chia - the seed of the Salvia Hispanica, a flowering plant of the mint family and recognised today as a 'super food'. They were cultivated by the Aztecs in pre-Columboan times and were as important a crop as maize.
Brown Linseed - otherwise known as flax, it's from the flowering plant Linum usitatissimum. The brown and yellow seeds are particularly high in Omega-3.
Sunflower - the seed of the Helianthus annuus. The seeds are a rich source of protein, dietary fibre and Vitamin B.
Pumpkin - known in the Americas as pepito, it is the seed of the large squash, the pumpkin. Like sunflower, they are a rich source of dietary fibre and protein, but are also rich in niacin, iron, zinc, potassium , manganese, magnesium and phosphorus.
Sesame - the seed from the Sessamum native to Africa and India. I use both black and white sesame - always unhulled.
Poppy - It takes 3,300 poppy seeds to weigh a gram and nearly 2 million to the pound, but they're fabulously rich in vitamins and minerals.
Some people include alfalfa. I don't due to the research that warns of the dangers of canavanine and the toxic effects it has on humans and other primates. I'm bad enough as I am.......
There's no need to soak the seeds. I'm working on a 85% hydration - so there's enough liquid there to accommodate the needs of the seeds that I'm adding.
INGREDIENTS
800 gms strong white bread flour - I'm using Canadian Manitoba, but only because that's what I've got in at the moment...
100 gms rye flour
100 gms spelt flour
100 gms active starter (1:1 rye / filtered water)
20 gms sea salt
842 gms of filtered tepid water
(Optional) 1 teaspoon diastatic malt powder (to help with the 'rise' and to give the rye and spelt a 'bit of a lift' - however, you will be able to detect a slight malty taste - not to everyone's liking)
1 tablespoon Chia Seeds
1 tablespoon Pumpkin Seeds
1 tablespoon Brown Linseed
1 tablespoon Sunflower seeds
1 tablespoon white sesame
1 tablespoon black sesame
1 tablespoon poppy seeds
Yes, I know there's seven seeds listed here.....but I'm counting white and black sesame as one. If you want to only use one rather than then other, double the quantity of sesame to 2 tablespoons.
METHOD
1. Add the flours and the seeds to a large bowl and mix. 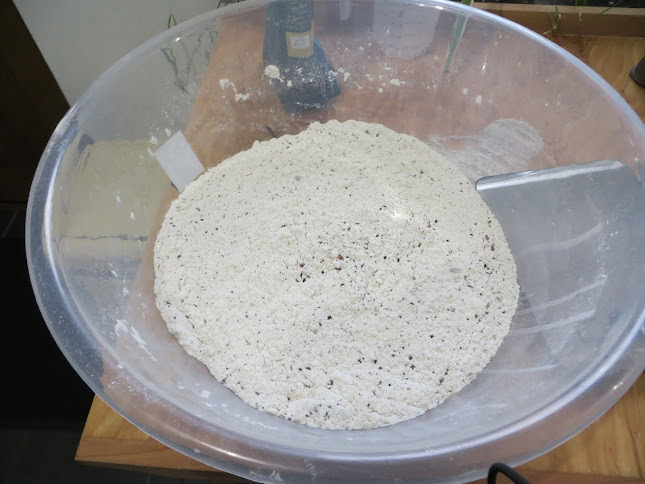 2. Add the water and stir until everything is combined. Cover and leave to autolyse for one hour. 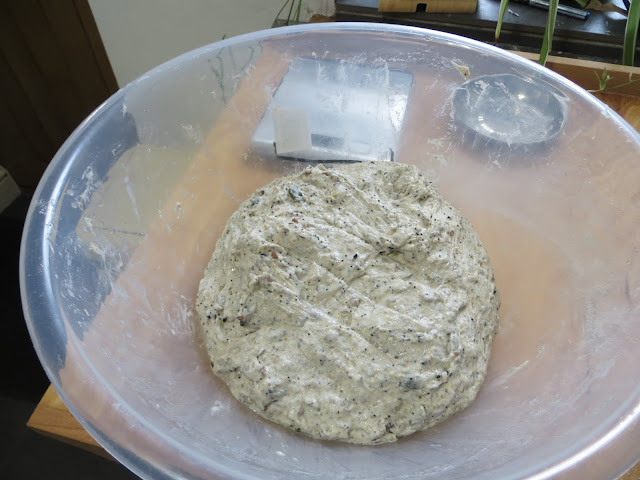 3. Dimple in the salt and mix to combine. Cover and leave for ten minutes. 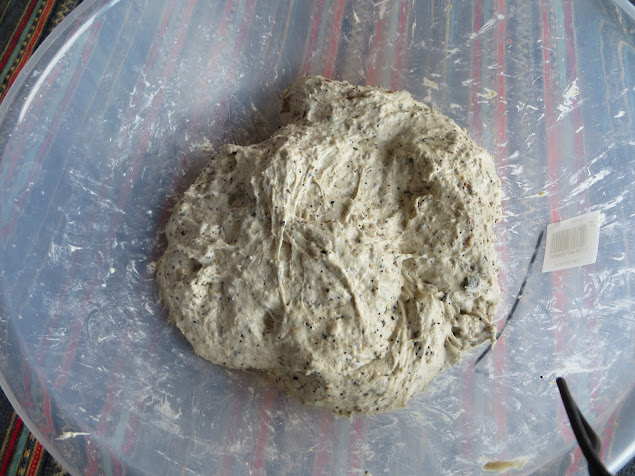 4. Start three sets of stretch and fold - leaving thirty minutes between sets
5. Start two sets of coil folds - leaving thirty minutes between sets
6. Perform one lamination and then transfer the dough to a bulk fermentation container, cover and leave to increase in volume by 90%
7. Gently ease the dough out onto a worktop and divide (by eye) into two equal portions.
8. Gently preshape into boules and pull gently towards you to help develop surface tension. Cover and leave for fifteen minutes. 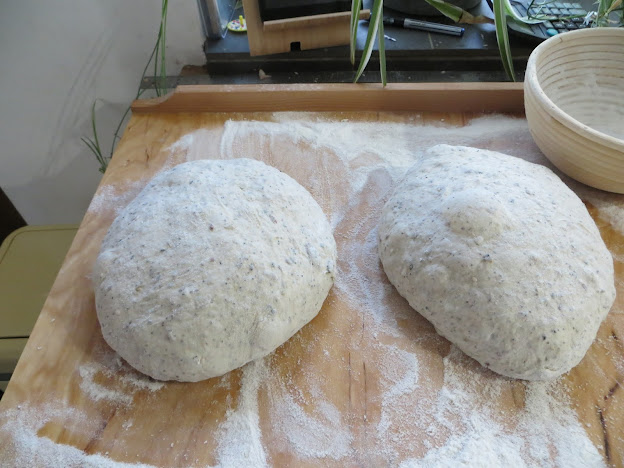 9. Reshape into boules and, again, gently pull towards you to develop tension. Transfer to a well-floured banneton (I use rice flour). Cover and transfer to the refrigerator at 5⁰C for 16 hours.
I'm transferring one right side up (left) and one upside down (right) ...just to show the difference after baking... 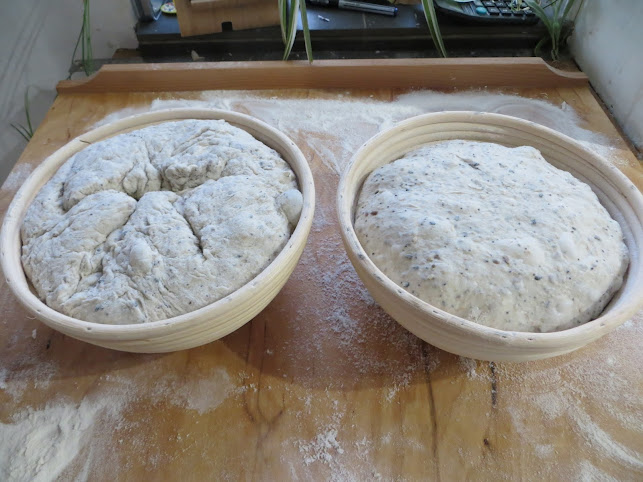 10. Preheat the oven and Dutch Oven(s) to 240⁰C.
11. Remove the bannetons from the refrigerator. 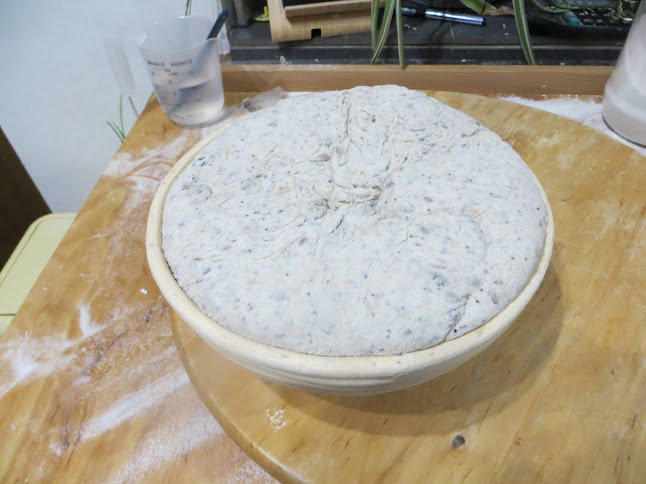 12.  Prepare the loaf for the oven. My method is to place a silicone cling on top of the banneton and then a wooden peel and then invert both on to a 'Lazy Susan'. This is not costly equipment. The sling is a cut down oven loner, the peel is made from beech plywood offcut and the Lazy Susan was picked up in a charity shop. 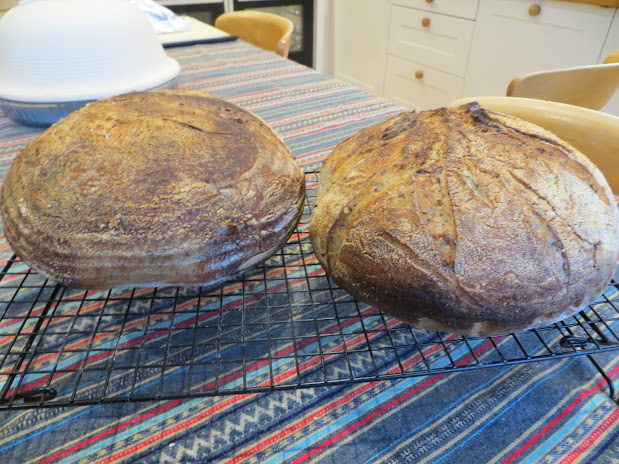 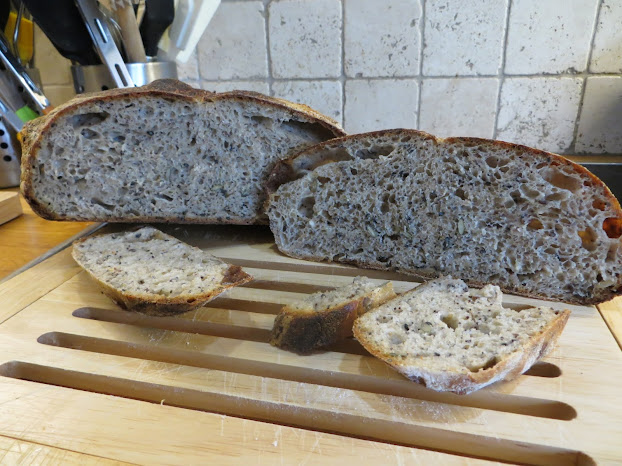