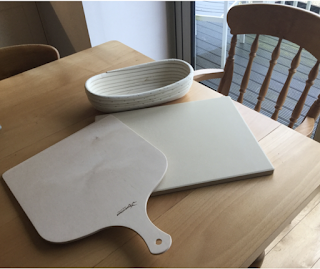 During the summer lockdown, my circular pizza stone cracked. I'd had it for a long time and knew that ceramic was never going to last a lifetime.

Looking around for a replacement, I realised that pizza stones or 'baking stones' as they're often referred to, are made from a wide range of materials: ceramic, stone, cast iron, clay and cordierite.

I decided to buy a rectangular stone made from cordierite which is magnesium iron aluminium cyclosilicate. They're about the same price as the ceramic stones but are less prone to thermal shock....and subsequent cracking.

At the same time I treated myself to a beechwood peel. I've been using a metal one for years, but it's become increasingly difficult to stop the dough sticking on it and it makes more mess than it's worth.

I've been trying to keep the stone scrupulously clean inbetween bakes....it's all novelty, it won't last. Eventually, it'll look as 'lived in' as the rest of my equipment.

So today, I'm baking sourdough  and trying it freeform using a banneton, peel and baking stone.

Last night I took 100 gms of 'starter' out of the fridge and added 100 gms of strong white flour and 100 mls of tepid water. Gave it a quick stir and left it covered over with a sheet of kitchen roll.

(if you're unsure about 'starters' see shorturl.at/hES79 )

Combine together and work into a soft dough.

Place into a lightly-oiled bowl and leave for 3 hours

At the end of the three hours, your dough should look like this.. 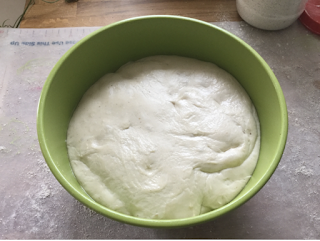 Now, turn it out onto a well floured board. I'm using Spelt flour at the moment. It's very coarse and the dough doesn't absorb much, hence it's a useful dusting agent. Don't worry if you use a lot, what doesn't go into the oven can always go back into the packet.
Stretch the dough out and fold the top edge into the middle. Then turn the dough 45 degrees and repeat. Turn, pull, stretch, fold, turn, pull stretch fold....carry this on for about 45 seconds.
I use a bamboo banneton. The one in the picture is a large one suitable for a 400 gm - 450 gm mix. I always buy my bannetons direct from China. Expect to pay about £8 for a Chinese banneton (inc p&p) and about £14 for the same thing from the UK.
Heavily flour the banneton using spelt flour and reflour the dough on all sides. Then, when you're ready, put it back somethere warm (24 degrees C) for two and a half hours or until the dough has reached the top of the banneton. 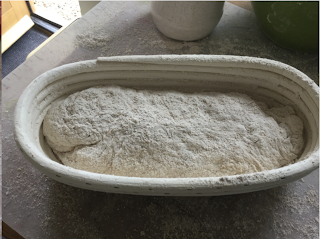 Stage 4
Flour the baking stone and place it into a cold oven and put a baking tray underneath to catch any bits of flour that might fall off. Then preheat the oven to 230 degrees C. I'm using rice flour for both the baking stone and the peel as it doen't burn and dough finds it hard to stick to it. 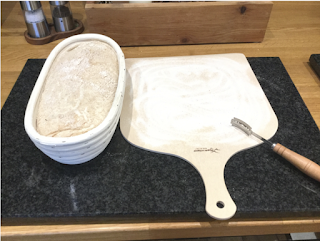 Take the wooden peel and flour it liberally with the rice flour.
Carefully tip the dough out of the banneton sideways on to the wooden peel. Gently move the dough a little to make sure it's not going to stick to the peel. 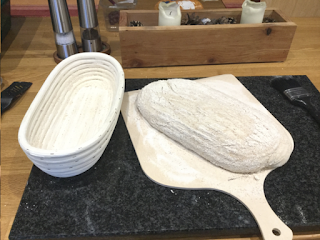 Dust the excess flour from the dough with a soft brush. I have a paintbrush that it perfect for this task. Then score the dough using a lame or blade in a pattern to suit yourself.
From the photograph you'll see that it's quite a high hydration and the dough has spread out. Don't worry, it'll recover in the oven once the benefit of 'oven-spring' kicks in.
Carefully slide the dough from the wooden peel onto the baking stone - be as careful as you can.
Close the oven door and let it cook for 40 - 50 minutes until it's a good dark golden colour.
Halfway through (20 minutes), it's looking like this..... 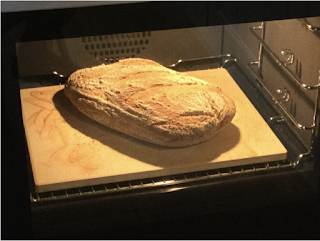 Remember, this is freeform....if you want a deeper loaf, it's got to be either a lower hydration level (at the cost of an airy crumb) or it'll need containing to allow the dough to rise at the expense of spread. You'll need to use a 'former' such as, for example: a cast iron or Pyrex casserole dish, a Dutch oven, an 8 inch tall cake tin or a 2lb loaf tin.
At 'full-time' the loaf is out of the oven and cooling. 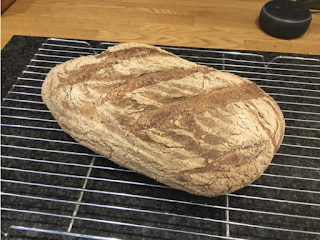 Of course, the proof is in the cutting.... 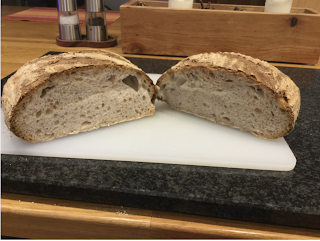 Still a bit warm to cut but the crumb is OK.
Happy baking....