Last night my sourdough starter was taken out of the fridge and reactivated. To each of the two 100gms of starter I added 100 ml of cool water and 100 gm of Nestrop Empress strong white flour.

We're lucky in Wales. The water is very soft and is ideal for bread making. I've been buying my flour from Albion Mills in Stockport since this March when flour was in short supply. Nestrop's Empress is a great quality flour and at £1.06 a kilo (www.amazon.co.uk) it's a good buy.

I've been using Patrick Ryan's technique since I started making sourdough and my 'starter' just keeps getting better and better. The longer you keep it and the more you use it then the better it gets. I tend to use a low hydration mix as I find a high hydration gives me too much of the acetic acid 'vinegar' taste. I might sacrifice a few artisan 'holes' in the crumb, but, for me, the taste is far superior - and easier on the taste buds.

If you're new to sourdough then, to be honest, you can't go far wrong following Patrick Ryan's video course. There's a link to it on the left under 'Useful Links'. My starter took me seven days to prepare and now I have half of it in the freezer - just in case of a disaster - and half of it (100 gms) in the fridge sitting quietly until the day before I bake. Then, I divide it into two, add water and flour and give them both a quick stir with the spirtle (see the image above) and they start doing their magic ready for the morning.

OK -  a confession. I stopped mixing and initial kneading by hand years ago. It's a case of 'why buy a dog and bark yourself?' I've got a Dutch whisk and a pair of hands but it's just too much a labour to do something by hand when a machine can make a far better job of it.

So, many years ago, I purchased two Panasonic SD 2500 model bread machines (£99.99 each from Amazon). I don't think I've baked in them more than once or twice, but as dough mixers, they are incredible. They have limitless patience and just the right 'touch'. I can't believe professional artisan bakers who bake in batches bigger than single loaves can be bothered to do it by hand when dough mixers are as good as they are. I'd never buy any other brand other than Panasonic. I've wore two machines out and I'm currently on my third and fourth machines but the old ones didn't owe me a penny.

Prepare your starter the night before....make sure you have at least 260 gms of starter. 160gms is for the mix...the remaining 100 gms goes back into the fridge ready for next week.

It's a half-mix today (if you want a double mix - 4 loaves, simply double the ingredients).

Everything goes into the machine. Many machines are not complicated things. I choose a short dough programme - Panasonic identifies it as 'Pizza' setting and it's a 45 minute programme. Switch on and go and do something useful. The skill of the machine is in creating 'texture' in the first mix and in kneading. I'll take over after that.

(If you're mixing and kneading by hand - it'll take a good 20 minutes to reach the consistency you want. It should be elastic and smooth and, if you hold it up to the light, you should be able to pull it and see through it without it tearing) 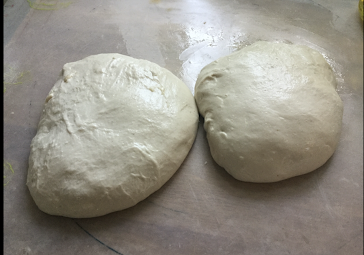 It produces quite a sticky dough, so I tend to lightly olive oil both a board and my hands to help in bringing the dough together. I usually start creating 'tension' in the dough by stretching it out,  pulling it back into the middle and then giving it a quarter turn. Twenty seconds of this is enough to start the process, ending up with the dough in a ball.
Then I pop it into a lightly olive-oiled bowl, cover it with a tea towel and put it somewhere where the temperature is as near to 22 degrees C as can be found. Our airing-cupboard is ideal for this...I just leave the door open slightly.

Then...leave it alone for three hours. 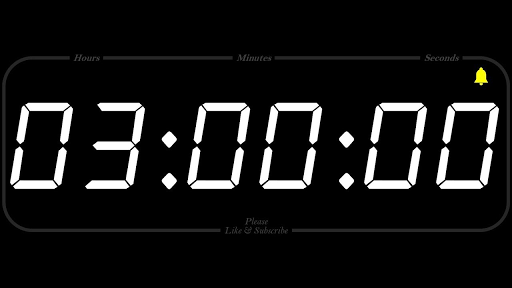 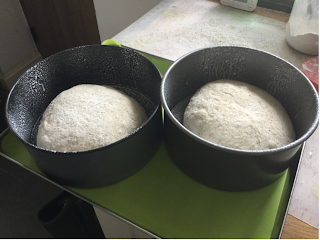 Now, flour the top of your dough, cover it with a tea-towel and put it back in the warm place for another three hours.

Sourdough Phase 4
After a further three hours, preheat the oven. I only use a bottom rack and sourdough benefits from a high temperature. Certainly, at least 225 degrees C or even 230 degrees C.
Once the oven is ready, gently flour the top of the bread (I use either rye flour or rice flour) and score using a blade. If you have a lame so much the better, but a serrated fruit knife, a razor blade or a scapel will do just as well. The angled lame will give you a 45 degree tear in the dough - allowing one side of the score to rise in an interesting way that's called an 'ear'.. However, it's all cosmetic. As long as the dough is scored, the bread will be forced upwards rather than outwards when it meets the heat of the oven. This is known as 'oven spring'.
My ovens are new and I'm not able to spray the dough once it's in the oven. If you want, you can spray it before it goes in. Sourdough has a crunchy crust by nature, spraying helps to make it even more crunchy. 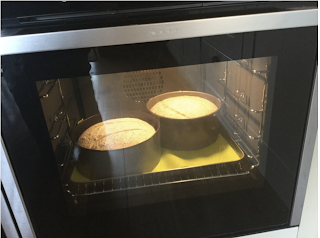 Once it's in it will need 45 - 50 minutes. Keep an eye on it....everything depends on the heat and the accuracy of your oven. Over time, you'll learn how your oven behaves. 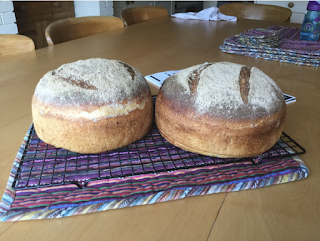 And there they are....perhaps they could have had a greater definition on the lame slash markings, but I like the way that the 8 inch loose bottom cake tins keep the dough together and sends it upwards instead of outwards. It makes for easier carving for toast or sandwiches.
I've also baked multiseeded loaves today and tested out two new Pullman tins.....but I've leave those to be repeated another day and I'll let you know how they go.
Happy Baking.....