What to wrap around your burger? 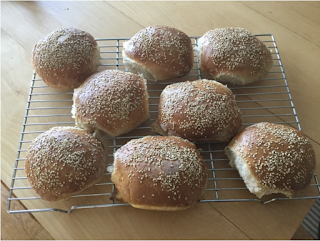 Every menu seems to offer a variety of burgers, even in the most 'gastro' of gastropubs. Burgers in 'fast food' outlets are on every high street in every town, the length and breadth of the country.

For me, the problem seems to be the burger bun. Invariably, it's a brioche-style bun that is far too sweet for my taste and also not substantial enough to handle a decent-sized patty.

I can be quite a fussy eater. I tend to like the patty and the bread and that's about it. When I watch people piling on cheese, onions, tomatoes, mayonnaise, gherkins, sauce and whatever, it becomes clear that a sugary, eggy brioche isn't structurally sound enough to hold it all together. If it doesn't break apart at the first bite, then by the time the juices from the inners have found their way into the outer bun, everything will have probably disintegrated.

I'm not sure the problem is the same with a hot dog. I think a soft doughy roll works quite well with a sausage. Give me a week or so and I'll deal with that issue in another post. I'll probably do something on the brioche later as well....

So, that got me thinking. If the French are so protective of their brioche, then what do they favour wrapped around their hamburger?

Sadly, the arrival of fast food outlets across France has meant that the sweet brioche bun predominates. However, there is still a resistance that favours using the traditional French bread mix - formed into the short baguette, a pain de compagne or a pain brié. In other words, a bread roll.

So, we need a roll that is soft on the inside but with a structural integrity that will hold everything together until the last bite. It has to be able to be frozen and be just as fresh when thawed as it was when first cooled from the oven. It must stand a quick 'toast' - although why people do that beats me.

Ingredients (for a 70% hydration)

1 tablespoon sugar (I use muscovado but, for this recipe, caster sugar works just as well)

Add the wet ingredients and the salt into the bowl or pan and then add the dry ingredients, adding the yeast last.

Use a basic dough setting on your machine (2hrs 20 mins) or, if you're mixing by hand, work it into a soft dough and then prove under a floured cloth for a good hour or until it has doubled in size. 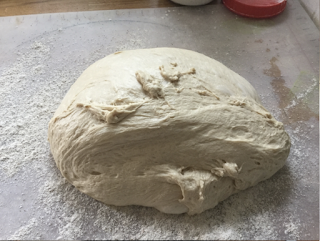 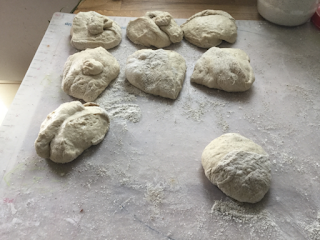 Eventually, you should have eight rolls, ready for their second prove. I leave these somewhere warm (about 24 degrees C), covered over with a sheet of parchment paper for about 45 minutes. 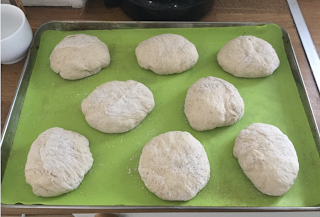 After 45 minutes, preheat your oven to 180 degrees C. Note, this isn't a hot oven. Partly because you're going to egg wash (yolk + a little milk) and scatter sesame seeds on the top of each washed bun. The slightly lower temperature stops the egg wash from burning.
By the way, did you know that there are 198 sesame seeds on a McDonald's bun?
Once the buns are egg-washed and sesame seeds added, they're ready for the oven 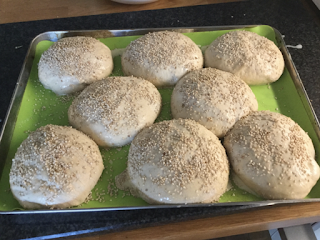 20 minutes at 180 degrees C and they're ready for the cooling rack.

There you are  - light, crisp and ready for whatever you want to put into them. I'm going to let these cool and then slice them before I put them in the freezer.
You'll notice that they 'joined' while they were in the oven. That's not a problem for me, but if you'd prefer them 'whole', then either buy a large enough baking tray to keep a fair amount of space between the buns in their dough stage, or bake on two trays, swapping them around half way through the bake.
Make your own burgers?
Treat yourself to a cheap hand burger press and a pack of waxed papers.
I use 2lb of 5% fat mince, a small handful of breadcrumbs (I usually use a piece of old sourdough), salt and pepper and a quarter of an onion, shredded finely.
Then it's hands in and make 5 oz patties.
Many recipes say add an egg as a binder...I find I never need to.
Chill for an hour and you're ready to cook.
I make a batch and then vacuum seal them in pairs for the freezer...always good to have a few in.
Happy baking....