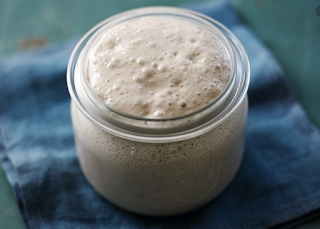 Baking sourdough always requires the use of a 'starter'. However, a quick look through any cookery book or a quick search online and you'll come across other words such as 'poolish' or 'sponge' or 'biga' or 'pre-ferment' in recipes where you think you might have been making straightforward sourdough.

So what is the difference? 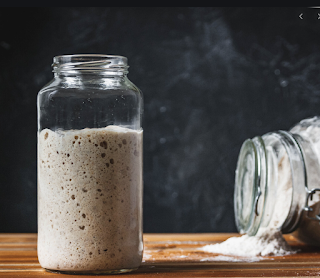 A 'starter' is also a 'pre-ferment'. It is a mixture of fermented flour and water that contains colonies of wild yeasts and lactobacilli. These microrganisms are essential to develop the flavour in bread and also to produce a 'leaven'.

The structure of a starter is flour and water that is allowed to ferment until such time as it develops bubbles and the distinctive acetic acid taste and smell. The key with a starter is to use it, save some and then refeed. The Boudin bakery in San Francisco still uses the original starter that was made over 150 years ago.

The starter is produced as a pre-ferment, ready to 'ferment' the main flour, water, salt, etc. that is used to make the dough that forms the basis for the loaf.

This process of 'raising' the dough - getting air into it - is referred to as 'leavening'.

A 'leaven' is the starter, which is the pre-ferment. Basically, it's a raising agent. Having it in bread dough helps to produce the gas bubbles that softens and lightens the bread. To help the leaven along, we knead the bread and this process produces extra carbon dioxide and hydrogen which is what gives the bread its lightness. Any commercial yeast or a sourdough pre-ferment will produce the leavening effect. 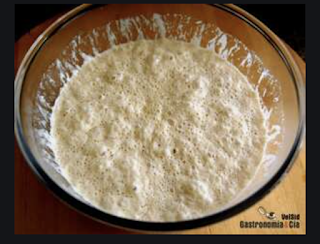 'Poolish' or 'pouliche' is a term used in French cookery. It is distinctive in that it is a wet mixture - sometimes called a 'sponge' - that is used in the same way as a 'starter' as a pre-ferment in bread making.

It ss noticeably looser and wetter than a usual sourdough starter.

The term 'poolish' originated in Poland around about 1840. The process of making a loose starter was brought to France in the 1920s, along with its name. Poolish needs to be used as soon as it is ready. 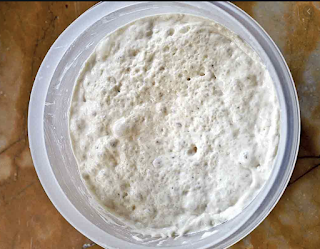 A 'biga' is similar to a poolish, except that it is a firmer, drier mix that can be held at its peak for longer. It is a word that has been absorbed into Italian cookery.

So, all the above are types of a baker's 'sponge' - their aim is to produce, taste, texture and chemistry. They are all forms of pre-ferment.

The 'poolish' would be the most loose and wettest mix.

The 'biga' would be firmer and drier.

'The 'starter' is almost a generic term - but usally refers to the type of pre-ferment that one would use when making sourdough.