Sourdough - What's Autolysing all about? 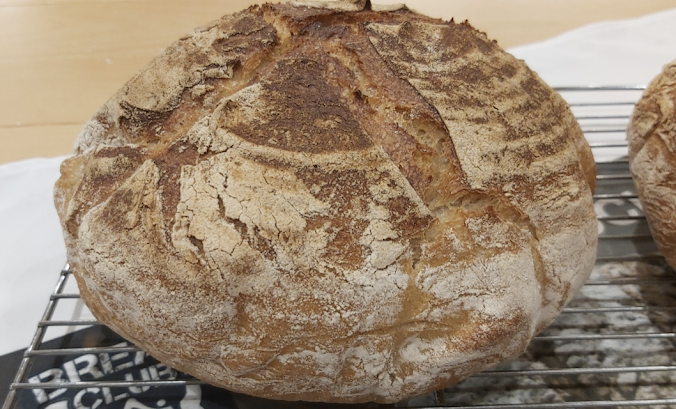 It's been a few months now since I launched BreadClub20 here on Google Blogger. The response has been fantastic with subscribers and readers from across the wide world. More and more people are signing up, liking, sharing or simply dropping in to other BreadClub20 social media outlets on Facebook (https://www.facebook.com/BreadClub20), Twitter (https://twitter.com/BreadClub20) and Instagram (https://www.instagram.com/breadclub20/)

I think it's time to delve a little deeper into one aspect of home baking that might seem a little 'niche' (to use my daughter's turn of phrase); but, in reality, it isn't. It's all about understanding why we do what we do and how, by thinking ahead, we can improve what we make and bake.

It's worth a read and worth a try. Once you're hooked, you'll see how easy it is to improve what you do.

Let's break this own into three stages.

Why should we Autolyse?

How do we Autolyse?

Right - let's get the science out of the way. In biology, autolysis is the process of self-digestion. It's where an enzyme is digested by a molecule of a similar enzyme. That's it. End of. Science over.

Now, back to baking.

An autolyse is a technique whereby the flour and the water is mixed together prior to adding any other ingredients.

Once combined, the flour and the water begin to act on each other. The mix becomes fully hydrated and the enzymes in the flour become activated. The proteins start generating gluten. And it's gluten strands that are the basis of excellent bread.

In addition, further enzymes start to break down the starch into simple sugars that help to feed the yeast once it's added.

The term was invented by a French chemist, Raymond Clavel. After World War 2, the French bread industry was in a perilous state and the quality of French bread was far below that when it had been at its pre-war peak. Clavel focused on ways to improve the quality, flavour and characteristics of French bread. The fact that today's Baguette, batard, pain complet, pain de campagne, fougasse and brioche (to name but a few) are so tasty and consistently good, is down to the work of Raymond Clavel.

It's all documented in his book 'Le Goût du Pain', translated as 'The Taste of Bread'.  It's still in print, but it's a very expensive read. However, you can download a free pdf version from here: 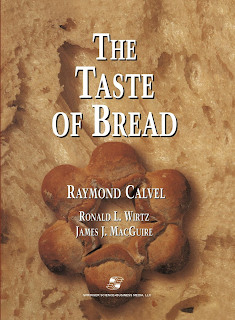 Why should we Autolyse?

Usually, we add all the ingredients, mix it into a sticky mess and then knead it into the dough ready for the first prove. Then we knock it back, reshape and second prove. Then we bake.

We autolyse to allow the flour to absorb as much of the water as it can - hopefully, becoming fully hydrated. This allows the enzymes in the flour to stimulate the proteins and start the gluten development.

Gluten ensures that the dough is elastic and stretchy.

In addition, sugars are formed which help to feed the yeast when the yeast is added to the mix. Yeast helps the dough to rise and allows the magic to happen that forms bread.

Autolysing also reduces the time needed to knead the dough - preventing over-oxidising which detracts from the final colour of the bread.

You can autolyse with ALL breads. It just so happens that, in this blog, we are autolysing before making sourdough.

How do we Autolyse?

Whether you are machine mixing or hand mixing, the autolyse stage is the same.

1. Place the water in the pan or bowl

2. Add the flour and stir

3. Cover and leave. How long you leave is up to you. If you're using a coarse or whole-grain flour, you'll need to leave LONGER than if you're using a lighter flour or your usual white / brown strong bread flour.

For whole-grain flours, autolyse for not less than 2 hours and not more than 4 hours.

For normal strong white / brown bread flour, autolyse for not less than 15 minutes and not more than 60 minutes.

If you're using a machine, still autolyse for 15 / 20 minutes without adding the additional ingredients.

Always add the yeast  AFTER the autolysing stage. Why? Because we don't want the yeast to start acting on the autolyse until it's done its job. And the acidity caused by the yeast will stiffen the dough prematurely.

Always add the salt AFTER the autolyse stage. Why? Because salt has an effect on gluten development. Salt tightens the gluten network. Tightening the dough is counter-productive when you're trying to loosen the gluten network through autolysing.

Then add the remaining ingredients according to the recipe and proceed.

To start with - I've mixed:

Then I stirred it all together, covered it up and left it for 30 minutes. (This is the autolysing stage)

If you're hand-mixing, bring it all together and then knead on an oiled surface until you have a silky dough.

If you're machine mixing, add the ingredients into the pan and choose a short dough setting (e.g. Pizza - 45 minutes). Turn out onto an oiled board.

Place the dough in an oiled bowl, cover and put somewhere warm (22 - 24 degrees C) for 3 hours. (Don't forget to remove the dough after about 90 minutes to stretch and fold it a few times before putting it back in the bowl in the warm place for the remaining 90 minutes)

At the end of three hours, remove the dough from the bowl and knock it back. Form the dough into a ball and either place it in a very well-floured banneton (please don't use the linen liner that comes with wicker bannetons - sourdough is far too sticky a mix) or in a bowl suitable for a second prove.

Turn the dough out carefully onto a baker's peel or metal tray, slash to suit and bake for 40 - 50 minutes low down in a preheated oven at 230 degrees C. 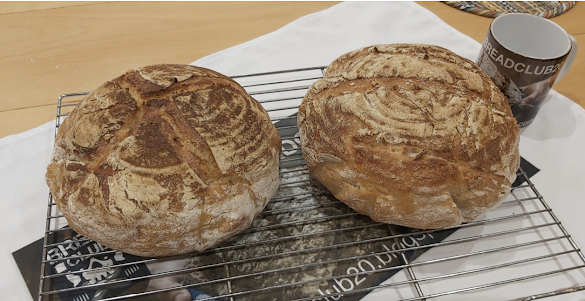 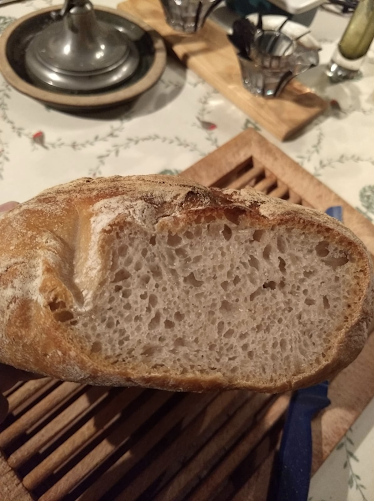 You'll find more detail on baking sourdough in the other recipes on the left hand side of this page in the 'Your Guide to the Recipes' section. If you're coming to this as a novice, I suggest you start with https://breadclub20.blogspot.com/2020/10/wednesday-is-usually-sourdough-day.html or any of the other earlier sourdough recipes.