Sourdough - in a self-styled Dutch Oven

Today, I'm using my vesion of a Dutch Oven.

Strictly speaking, a Dutch Oven is a thick-walled cast iron cooking pot with a tight-fitting lid. They've been used as cooking pots for hundreds of years. Many cultures have their own versions: In English speaking countries (except for the USA), they're 'casserole pots', In French they're cocottes. In Japan, they're tetsunabe; in the Balkans, a sač; In South African, they're potjiekos; in Spain, a cazuela, and in Australia, a Bedourie oven.

In the Netherlands, you'd think it would be called a Dutch oven, but it's not. It's a braadpan or a sudderpan.

Originally, they were a cauldron shape, with three legs and a handle so that the pot could be suspended over a fire.

I'd love a proper Dutch oven, but they command a king's ransom in specialist shops and on the internet. Instead I've adapted a cast-iron casserole dish. It's not even a Le Creuset, it's a copy I bought far cheaper years ago from Carrefour in Calais.

The important thing is that the handle on the lid has to be oven-proof or it has to have no handle at all. You could also use a Pyrex or borosilicate casserole dish with a flat lid. Try and find one where the sides are straight rathr than curving in towards the bottom of the pot. Straight sides means a better shaped loaf. By the way, the heavier the pot, the better. Alumunium pots do not tend to distribute the heat evenly.

My cast iron pot measures 24 cms across the top.
Yesterday, I drew off 120 gms of ferment from my original starter which I keep in the fridge and added 100 mls of water and 100 gms of strong white flour. Quick stir with a spirtle (one of my favourite bread-making pieces of equipment) and then I left it covered with a piece of kitchen roll to keep out the flies and the dust for 24 hours. 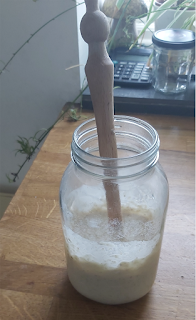 Today, I'm using my usual sourdough recipe. As a reminder:
400 gms of strong white flour
230 ml of cool water
160 gm of starter
5 gms sea salt
Combine together into a soft dough.
Place into a lightly-oiled bowl and leave for 3 hours at about 22 degrees C.
You'll find more details for this process in the 'Your Guide to Recipes' section on the left of the home page.
At the end of the 3 hours, your dough should look like this:

Time to tip it out onto a floured board and work some tension into it. If you've been reading some of the other posts, you'll remember that this is a process of holding the dough down with one hand and stretching it out with the other, then folding the stretched piece back into the middle. Then turn the dough through 90 degrees and repeat. Keep stretching, folding and turning for about a minute to help build up the tension.
the dough will then look like this:

The dough now needs to rest for the second prove for a further two hours. I'm proving it in a large banneton. Why? Because I have one. Simple as that. I also want a container that I can turn out onto a sheet  of parchment paper or similar easily and without much fuss. I want the pattern of the banneton on the top of the loaf, so what you see as the top surface in the photo below will, in fact, be the bottom of the loaf. If you don't have a banneton, any very well-floured bowl will do just as well. Just remember to flour the container and the dough. I'm using spelt flour again as coarse ground flour isn't as easily absorbed into the sourdough.

The bowl / banneton is covered with a tea towel and put somewhere warm (22 degrees C) for two hours.
After two hours, oil or well-flour the inside of your Dutch Oven, oil and replace the lid and place the whole thing into a cold oven.
Preheat the oven to 235 degrees C.
When the oven is ready and up to heat, bring the dough from its proving place and carefully turn it upside down on to a piece of parchment paper or silicone paper.

As you can see, I turn it over using a large metal pizza plate and I use silicone cloth. This is absolutely food-grade and non stick (available very cheaply from Ebay) and can be washed and reused over and over again. It allows you to create a 'sling' for the dough.

Slash the dough as desired. Putting the slashed dough into a hot Dutch oven will help 'oven-spring' allowing the dough to rise.
Take the hot cooking pot out of the oven and remove the lid. Carefully place the dough inside the pot and replace the lid. Be careful - it's going to be VERY HOT INDEED.

Bake for 20 mnutes with the lid on and thenm using oven gloves, carefully remove the lid for a further 20 - 30 minutes until it's the colour you want it to be.

I think my silicone cloth is ready for the wash....it becomes tarnished due to burnt on flour
Lift the loaf out of the Dutch Oven and place on a cooling rack.

And there you go.....sourdough in a self-styled Dutch Oven.
Happy Baking....